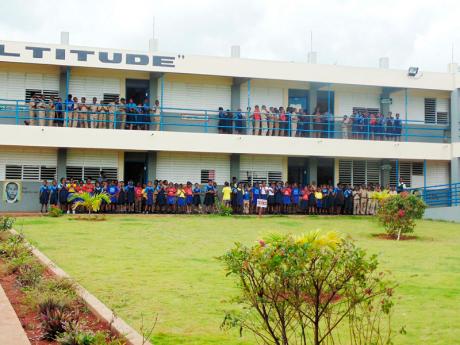 The grounds of Bellefield Primary School, Manchester.-PHOTO BY ANGELO LAURENCE

MANDEVILLE, Manchester:A GOOD education is perhaps the only asset that never loses its value regardless of the economic climate or removable from one's possession.

In today's global community, education has become the passport to financial independence.

This recognition has bolstered the efforts of the staff of the Bellefield Primary School to ensure that each student is exposed to a broad-based curriculum that encapsulates not only the academics, but also the social disciplines of an orderly society.

Perched on a hill overlooking the eastern communities of Mandeville, the postcard view of the landscape below is complemented by a clean and well-kept school compound. This, however, did not come about by chance; instead, it is the end product of the hard work of principal Paul Grant and his staff.

Grant, while beaming with pride and extolling the upward movement of his students academically, like an unselfish father, made it clear to The Gleaner, that his predecessors laid a solid foundation for him to build on, and they must be well recognised for their positive contributions.

With an enrolment of 600 students and 23 teachers, literacy has moved steadily upwards since 2010 and is now at 92 per cent, and numeracy near the 80 per cent mark, an unsatisfied Grant said while lauding his teachers for their unbridled dedication and support.

Convinced that adequate funding for a first-world type education system will not be forthcoming from Government anytime soon, Grant said principals and administrators will have to do some very "deep thinking" and come up with creative ways to make the system work as a first-world entity "for that is what is expected".

With more than 20-years experience as an educator, Grant feels that education in Jamaica is poised for growth. Jamaica, he declared, is not short on studies and data, which give clear guidance as to what needs to be done for a better education system, "what we are short on is funding" he said. Principals and staff, he said, in the face of the financing challenges, will have to become "proactive" and sell their schools to the community, private sector, funding and charity agencies to achieve their goals. If we who are in charge do not do this, then we will lose growth and upward mobility in the education process. Technology, he said, must be incorporated as a tool and subject in the class room, while pointing to the school's computer lab and Smart TV interactive teaching board..

He said that the United States Peace Corp and the Courts for Kids organisations have been very supportive in building a multi-sports court at the school, which was officially handed over a week ago with numerous sporting gear. Minister of National Security and Member of Parliament for Central Manchester, Peter Bunting, and Minister of Youth and Culture, Lisa Hanna, were present for the handover.

Like any successful business, added Grant, it is a team effort, and at Bellefield Primary it is no different. Teachers here, and in particular vice-principal Marilyn Mason-Anderson, make excellence in the education product we dispense achievable. Their unquestionable support for Bellefield Primary's vision, work ethics and care for their students' welfare make them some of our many unsung heroes.

Principal Paul Grant, vice-principal Marilyn Mason-Anderson and staff of Bellefield Primary School prove that there are no odds against their school's goal of 100 per cent achievement in all educational disciplines.