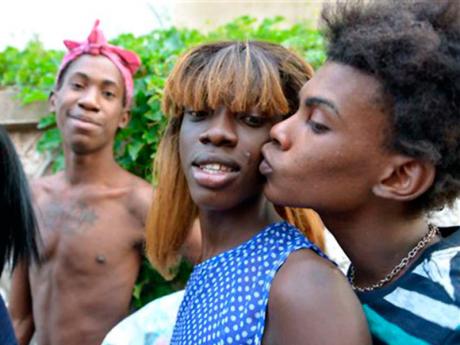 A young transgender Jamaican and two friends pose for the camera. - AP 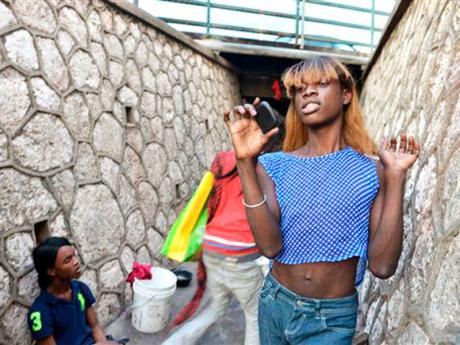 A young transgender Jamaican checks her wig in a mirror at the entrance of a sewer pipe along a trash-strewn canal where she lives beneath a busy road in Kingston.
1
2

A handful of sex workers sit on discarded cardboard along a filthy sewer channel, sharing food and razors to shave their legs and faces as they prepare for the night's labour on the streets of Jamaica's capital.

Gay sex and prostitution is illegal in Jamaica, and LGBT people who sell sex face arrest or worse. But this normally wary group is welcoming on a recent evening as a volunteer descends into the open channel with condoms, lubricant and health advice.

"It's hard living like this, but we're trying our best to stay safe and healthy. Nobody wants to get HIV," says one of the gay men, a shirtless 21-year-old who gives his name only as Kris.

In much of the world, giving out condoms and guidance to gay, bisexual and transgender sex workers is routine. But reaching out to men who have sex with men is practically revolutionary in parts of the English-speaking Caribbean, where homophobia and laws criminalising gay sex have long driven people underground, turning them into the toughest group to reach with HIV prevention programmes and fuelling a regional epidemic.

Now, there's a growing momentum to turn the tide in Jamaica, Trinidad & Tobago, Guyana and eight other countries that criminalise sex between adults of the same gender. Even as funding grants get tighter, HIV prevention programmes to reach men who have sex with men are scaling up and advocacy groups appear energised.

"We are in an entirely new era," said Ernest Massiah, the Trinidad-based Caribbean director for the United Nations programme on HIV and AIDS.

A clear sign of changing times is Jamaica's Color Pink Group, a non-profit founded in 2011 whose existence would have been almost unthinkable on the island a decade ago. On a recent night, founder James Burton, one of very few Jamaican homosexuals who feel comfortable disclosing their full name, wore a loud pink shirt as he spoke about HIV prevention to a group of young gays outside a Kingston shopping mall.

"This is what was really lacking before: visibility and one-on-one connections," said Burton, whose group also provides vocational training and distributes condoms and lubricant.

Overall, the Caribbean has the highest rate of HIV outside sub-Saharan Africa, though both the overall and per capita numbers are much lower. Regional infection rates are highest for men who have sex with men in countries with longstanding laws that criminalise gay sex.

In Jamaica, roughly 1.7 percent of the adult population has HIV, according to UNAIDS. But roughly 33 per cent of men who have sex with men are believed to be infected on the island. It's the highest rate for that population in the Americas and one of the highest anywhere.

In a bid to tackle discrimination against gay men in the health-care system, the rights group Jamaica Forum of Lesbians, All-Sexuals and Gays has partnered with a government HIV programme to sensitise hospital and clinic staff to homosexuals' human rights. It can be as simple as training health workers not to narrow their eyes or cast judgement on any patient seeking a rectal exam.