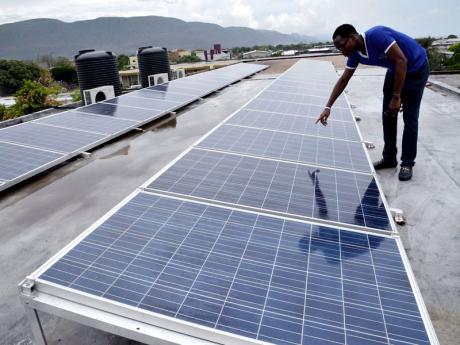 Solar panels at the Holy Trinity High School in Kingston. 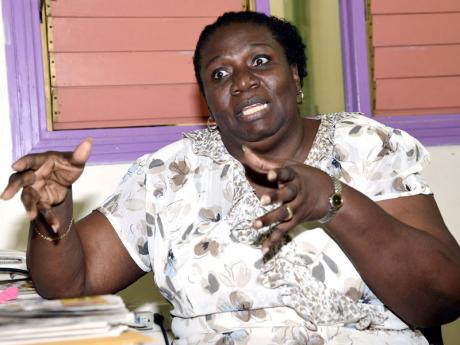 SHOCKED THAT the approximately $1 million monthly electricity bill at Holy Trinity High School has been cut by half, the country's sole power provider, the Jamaica Public Service Company (JPS), made its way to the Central Kingston-based school to investigate whether the reduction was due to meter tampering or abstraction.

But Holy Trinity, a technical institution with an auto-mechanic centre, cosmetology and computer labs, as well as welding and woodwork workshops, a music department and a home economics department, has plugged into the sun. The school has been relying less on the mainly oil-powered electricity supplied by the JPS.

"Our light bill was touching nearly $1 million per month and now our light bills are down to $500-$600 and odd (thousand) per month, where we can manage it easier. The JPS came because they could not believe the drop that they saw. They came to measure to see what was happening and then they recognised that we had solar panels installed," principal for the institution, Margaret Brisset-Bolt told The Gleaner.

Brisset-Bolt said it costs approximately $2 million per month to run the school, a tab which does not include wages and salaries. At the same time, the school has an outstanding bill with the JPS, which the principal says they are making every attempt to clear, even as she laments the fact that her institution has been hobbled by low revenues.

Education Minister Ronald Thwaites, in whose constituency Holy Trinity falls, said in the House of Representatives on Wednesday that the experience of schools like Holy Trinity underscores the need for more schools to rely on renewable energy such as solar.

"This year, we want as many schools as possible to be equipped with solar panels," Thwaites told Parliament, while highlighting the case of Holy Trinity, whose solar system is a gift from private-sector group New Leaf Power. He said the PetroCaribe Fund is willing to assist schools with the installation of renewable-energy solutions such as solar panels.

The 10,000 watt, grid-connected, roof mounted photovoltaic system was installed at Holy Trinity last August and is designed to reduce the school's consumption by 1,250 kWh per month. The cost of the solar platform is $3 million. It is estimated that the cost of producing power with the use of the system is US$.10 to US$0.15 when compared to the current cost of power supplied by JPS, which is US$0.42 cents.

Brisset-Bolt said members of the administrative staff often joke about New Leaf Power, with its principals the Wright brothers - Brian and Robert - being right for the school.

Robert Wright told The Gleaner that Holy Trinity was selected because of it being located in one of the country's vulnerable Corporate-Area communities - between George Headley Drive and South Camp Road. The Brisset-Bolt-led school breathes the same air as the more esteemed St Georges College, Kingston College and Alpha Academy, but has been the lowest performing of the bunch. In addition to its academic challenges, only 23 per cent of the students whose parents were asked to contribute auxiliary fees have made payments, leaving the school struggling to make ends meet.

"All we were doing was pay electricity bills. We could not do anything; we could hardly buy equipment for the students to work with. The savings now is being put into school materials, especially for the welding and woodwork departments," Brisset-Bolt said.

"I don't think anybody can understand unless you run a school. Just the fact that you can now think about meeting your electricity bill ...; every month we used to fret. The day we heard that JPS came ..., we were saying we were in trouble. It was just a stress on us to pay electricity bills. You conserve as best as you can but there is so much you can do and no more," the principal added.

Meanwhile, Robert Wright said it was time the nation's schools seek to leverage the potential of solar power, arguing that the Holy Trinity experience underscores that the benefits of doing so are real.

"We have done an assessment of energy consumption at schools and have discovered that grid-connect solar systems can significantly reduce their energy costs because schools operate mainly during the day when these systems are at their peak," Wright said.