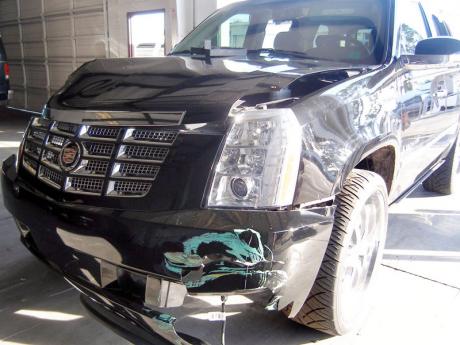 A vehicle with this kind of damage would have to be repaired overseas before being brought into the island. - FILE

An increase in the importation of damaged vehicles has triggered a crackdown by the Jamaica Customs Agency, which has declared it is taking steps to stem breaches of its system.

Commissioner of Customs Major Richard Reese made it clear yesterday that he was taking a no-nonsense approach to deceitful vehicle importers, with approximately 25 vehicles seized since 2012.

Reese directed The Gleaner to Section 16 of the Government's Motor Vehicle Policy, which states that "the importation of motor vehicles that are considered to be in a damaged or salvaged state is prohibited, irrespective of the extent of structural damage, whether the damage was caused through flooding or any other natural disaster and whether the damage occurred in transit or not, once the repairs are not done prior to importation".

The ban on the importation of damaged vehicles was first imposed in 2008 under Karl Samuda, who was then minister of industry, investment and commerce.

Prior to the ban, thousands of damaged vehicles were brought into the island each year, allowing importers to pay little duty before carrying out sometimes minor repairs, which significantly raised the value.

In 2011, Dr Christopher Tufton, who succeeded Samuda in the industry ministry, said he was considering lifting the ban, noting it was providing work for auto-repair workers overseas instead of those operating locally.

However, in 2013, the Trade Board revealed that the ban would remain in place.

Yesterday, Reese explained that persons have come up with ingenious ways to beat the system.

"Persons importing these vehicles put forward a number of reasons when damage is detected and they come up with mechanisms to literally corrupt the system," he said. "However, the fact is that such practice is prohibited, which means that the onus is on importers to ensure that all the necessary adjustments are made prior to the vehicle being shipped."

Reese added: "Once the vehicles arrive and they are discharged from the vessel, we have a team that does preliminary inspection, and if any damage is detected, digital shots (photographs) are taken and a report will be made immediately."

He noted that sanctions include persons being fined up to $500,000, cited for permit breaches, and forfeiture of vehicles.

Reese also warned persons who bring in artwork and paintings to ensure that they are aware of what is required.

"These people have to be very careful because we have to get the competent authority here, which is the Institute of Jamaica, to assist us in determining values. Therefore, persons must be mindful that whatever you are bringing in must line up with our assessment policy," he said.

"To all importers and exporters, we encourage them to make contact with the Customs Agency, or equivalent agencies in an overseas territory, to inform themselves fully as to what is required. It saves time and it saves money," Reese told The Gleaner.

He added: "We have been in contact with our counterparts in the primary export markets, which are the US (United States) and Japan, reminding them of this prohibition so that their customs persons can do the necessary adjustments."