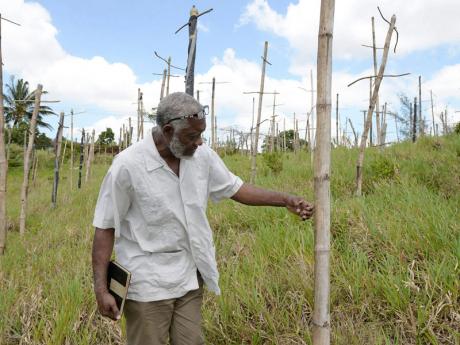 Northern Caribbean University's Dr Mark Harris, professor in biology, chemistry and environmental sciences, points to the holes cut in the bamboo for the side struts. 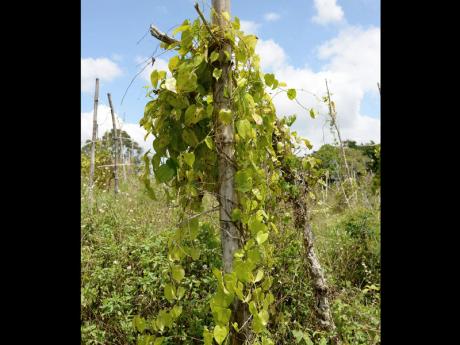 With the side struts in the bamboo yam sticks, the yam vine is able to spread out more and this increases yam production. 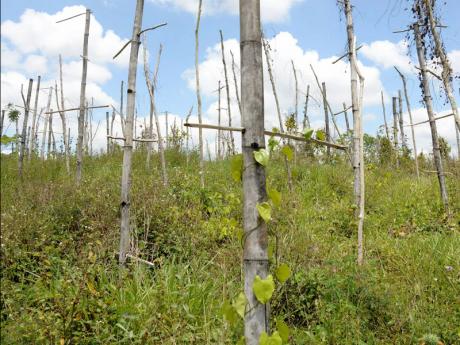 These bamboo yam sticks are still in good condition after the yam has been reaped. - Ian Allen/Staff Photographer 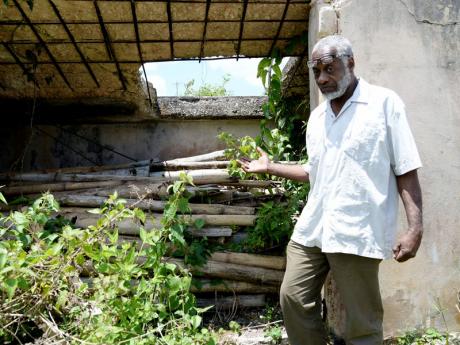 With two consecutive years of higher yields, Odean Blake, a 65-year-old yam farmer from Allsides, close to Wait-A-Bit, Trelawny, is happy with his treated bamboo yam sticks. Not only do the treated bamboo yam sticks produce higher yields, they last longer than the traditional common sticks. So satisfied is he with the results that Blake told The Gleaner the new sticks are "the best thing that ever happened to farmers".

In a recent telephone interview, the Trelawny farmer said he has been using the bamboo sticks for three seasons - since 2011 - and still does not need to replace all of them. Blake began with one stick per hill, but now he is using one stick for two hills of yam. "This has meant a tremendous saving to me, and there is more sunlight penetrating the leaves so I get greater yields," he said. And by not having to buy sticks every year, he is also saving money.

The use of treated bamboo for yam farmers is a project being pioneered by Northern Caribbean University's Dr Mark Harris, a professor in biology, chemistry and environmental sciences. He told The Gleaner that the sticks have the potential to reduce deforestation - thereby enhancing groundwater conservation in the Cockpit Country and other major watershed areas. It will also aid in mitigating climate change.

Harris noted that in recent years, cutting down young forest trees for yam-sticks has produced record rates of deforestation in Jamaica. He describes the practice as unsustainable because these harvested forest trees, lasting an average of two years or less as yam sticks, require at least five years for regrowth. Harris said the key to reversing deforestation is finding a plant substitute that is fast-growing. To be a sustainable option, however, its longevity as a yam stick should not be shorter than its own growth to harvest period. The solution seems to be bamboo.

"The bamboo sticks are made more efficient because four sets of holes are made at intervals in its length, through which side struts are placed, and these are what anchor the yam vines as they climb, extending laterally and producing more leaves," Harris explained during The Gleaner's recent visit to the test site in Mandeville. However, the holes in bamboo increases ingress of fungi and insect borers to carbohydrates (sugars, starch, plus alcohols) in the wood fabric. This rapidly accelerates bamboo decomposition. For now, plastic bottles cut in half are used to cover the tops of the sticks, thus preventing water from settling in them.

The dried bamboo sticks are placed in water in a 'tank' made from blue tarpaulin, framed with lumber; this is allowed to ferment, removing the starch and other substances. The process takes 30 days and the water is changed every seven days.

But is this sustainable? Harris is sure it is because of the vast amounts of bamboo grown in St Mary and Portland.

"We will have enough to supply farmers in Jamaica so we have begun to spread the word about it, and we are sending a proposal to funding organisations because we need in excess of J$15 million to set up a factory to produce the bamboo yam sticks in commercial quantities," Harris noted, adding that the first phase was completely hand done.