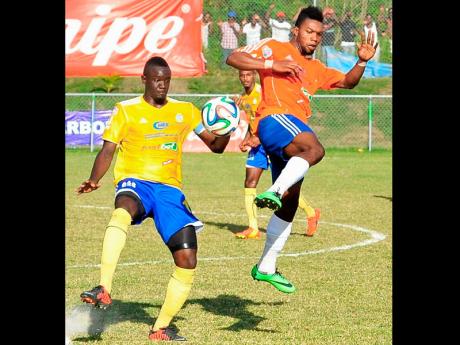 Dino Williams scored the winner in the 38th minute as MBU emerged 3-2 winners on aggregate after the first leg ended 2-2. Williams collected a beautiful pass from winger Alan Ottey before steering the ball past Levor Williams in goal for the visitors.

Dean Weatherley, the man in charge at MBU, praised his players for some outstanding work, telling The Gleaner that the plan to run them into the ground with pace worked like a charm.

"We were fitter than they were and at this time of the day, we knew the heat would bring the game into our favour.

"Reaching the final is something great not just for MBU but for western Jamaica. It's been a long time something such as this has not happened to us, so now, we're gonna go into that final and make the best use of it," reasoned Weatherley.

It was the kind of display from the MBU that fans have come to love: free-attacking football laced with strong defending.

But the goal should have come earlier as Williams' effort from inside the area drifted off target in the 36th minute with the home side pressing the contest.

He then made amends with a neat finish at the near post two minutes later. By half-time, it was clear that Harbour View would have to combat the heat, the MBU players and the raucous home crowd.

They almost levelled the score when John-Ross Edwards fired at goal, but watched in disbelief as Lesly St Fleur headed off the line to keep their slender lead in tact in the 60th minute as the movement of goalkeeper Jacomeno Barrett was hampered by cramps.

Eight minutes later, it was Harbour View's time to deny the now buoyed MBU another goal. Their goalkeeper was called upon to save a dipping long-range effort from defender John Barrett.

MBU, however, held on for the famous win that sent them to their first final since they last won the title under the Seba United name 17 years ago.

"This is just a wonderful day for us, because as a club, we have been striving to get back to the place where we are genuine title contenders, and now, we have a chance to win a third title. It could not be any better," said Weatherly, who took over the coaching reigns after Hugh Solomon vacated the post for personal reasons.

"I don't think we created enough chances and the one goal from Dino Williams was good enough to earn them the win. Congratulations to them," he said.

The second leg of the Arnett Gardens versus Waterhouse semi-final will be played tonight at the Anthony Spaulding Sports Complex. The teams drew the first leg 3-3. Kick-off time is 8.30 p.m.