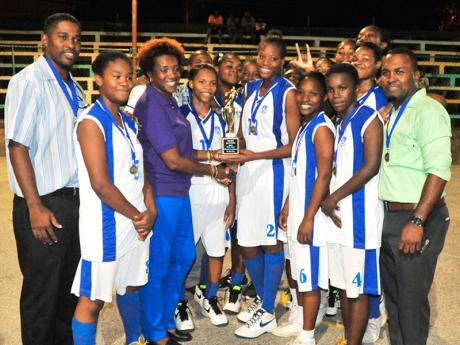 At the beginning of this season's ISSA Western Schoolgirls Under-16 Basketball Championship, many followers of the game were already pencilling in Spot Valley High, the odds on favourites, to retain the title.

However, Mt Alvernia High, led by Tara-Gay Heaven's top-class performance, ripped that script to pieces on Monday afternoon to secure their first hold on the title, defeating Spot Valley 48-38.

It was a fitting finale as Spot Valley, although a little overmatched, tried to use the speed and ball-handling ability of their top shooter, Lanacha Smith, to good effect, on her won she was unable to cope with the Mt Alvernia players.

Smith ended with a game-high 27 points, but only one other member of the Spot Valley team got into double figures, Tasha Harris, who put up 11 points, seven rebounds and three steals.

Heaven, meanwhile, was destructive for Mt Alvernia. Her 19 points, nine rebounds and four steals was the catalyst for their first title success in just their second year in the championship.

"We came very confident and we played a total team game today, getting everyone involved. This is a very sweet victory for us," said coach Jeffery Cooper.