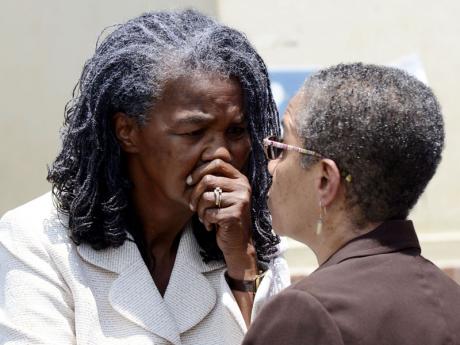 Ionie Ramsey (left), retired superintendent of police and Fay Ellington, reacting to the news of the sentencing of James Forbes at the Corporate Area RM Court yesterday. - Ricardo Makyn/Staff Photographer 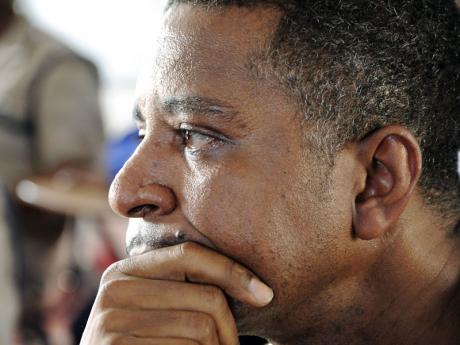 A MAGISTRATE yesterday slammed a penitent James Forbes before tagging the convicted Senior Superintendent with a fine of just under $1 million.

However, within two hours, the fine was paid and he was whisked from the courthouse.

"It is quite reprehensible how SSP Forbes dealt with this matter," said Resident Magistrate Stephanie Jackson-Haisley, as she passed sentence on the senior police officer in the Corporate Area Resident Magistrate's Court yesterday.

Jackson-Haisley was referring to a meeting, which Forbes admitted to facilitating between businessman Bruce Bicknell and two police sergeants. The meeting - at Forbes' St Andrew offices - came four days after the two sergeants arrested Bicknell for allegedly offering them a bribe during a traffic stop in east Kingston in April 2012.

Prosecutors, led by deputy director of public prosecutions Tracy-Ann Johnson, argued, during the trial, that an agreement was reached at the meeting to dispose of the case against Bicknell - who had been released on bail - before he appeared in court.

Jackson-Haisley questioned whether SSP Forbes would have offered the same assistance "if it was any Mr Tom or Harry.

"One person should not be allowed to escape the law simply because of who they are," the magistrate underscored.

She said in arriving at her sentence, she also had to take into consideration the public interest concerns in the case and what message it should send to others to deter them from carrying out similar acts.

However, before imposing a fine of $800,000 or six months in jail, Jackson-Haisley said she could not turn a blind eye to Forbes' stellar contribution to the Jamaica Constabulary Force (JCF) and the fact that there was no evidence that he benefited from his actions.

However, before the sentence was handed down, Forbes, through his attorney Jacqueline Samuels-Brown, told the court he accepted that he "committed an error in judgement".

"That has cost him his reputation and, as a matter of law, his career in the Jamaica Constabulary Force and the benefits he has laboured for," Samuels-Brown added.

"His conviction is significant punishment for this man," she insisted.

Former president of the Jamaica Council of Churches the Reverend Dr Roy Henry told the court that SSP Forbes told him that he was depressed and humbled by his conviction.

Henry, who was giving character evidence for Forbes, said the senior police officer informed him that he regretted that his reputation was being called into question through his own actions and that he will now have to do some "soul-searching to see how the Lord will lead him out of this".

Samuels-Brown has signalled that Forbes will appeal his conviction.