Rainford to remain on job until judge rules 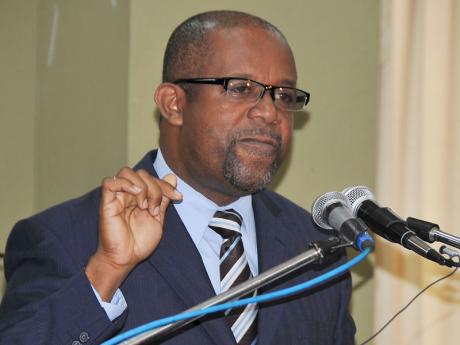 PERMANENT SECRETARY Robert Rainford, who was fired last year because he bailed former Cash Plus boss Carlos Hill, is to remain on the job until Justice David Batts hands down his ruling in the Judicial Review Court.

Justice Batts made the ruling on Wednesday when he reserved judgment in the claim brought by Rainford who is challenging his dismissal. The judge extended the injunction which was granted in February for Rainford to remain in the post as permanent secretary in the Ministry of Local Government and Community Development.

Rainford has named Governor General Sir Patrick Allen, the Public Service Commission and the Chief Personnel Officer in the Office of the Services Commission as respondents.

Attorney-at-law Douglas Leys, who is representing Rainford, told the court that Rainford's contract as permanent secretary expires in August.

Rainford took the issue to court last year October after he was fired following a revelation that he posted bail for former Cash Plus boss, Carlos Hill, in 2010.

He was informed that his job was being terminated because he had brought the public sector into disrepute.

Commenting on the case, Duane Thomas, one of Rainford's lawyers, said, "The solicitor general conceded yesterday that the door is still open for Rainford to go to the local Privy Council, but our view is that such a remedy is inadequate because he requires a quashing of the dismissal letter which interferes with his constitutional right as a permanent secretary."

Rainford's lawyers argued that the Constitution and the Public Service Regulations were breached when he was fired, because certain procedures were not followed. They said Rainford bailed a family friend and that could not be held to be a conflict of interest with his job.

Solicitor General Nicole Foster-Pusey argued that the respondents did not breach the Constitution or the regulations when the recommendation was made for Rainford to be fired. She also argued that the Governor General should not be joined as a party to the suit, but Leys responded that he was being joined in his personal capacity and not as the queen's representative.

Foster-Pusey said Rainford could take his case to the local Privy Council, which was able to set aside his dismissal or give him a punishment which was less than the dismissal. She pointed out that the scope of the Judicial Review Court was limited because what the judge was looking at was illegality or procedural impropriety.

Rainford is seeking several declarations, one of which was that the purported termination of his employment was illegal because certain provisions of the Constitution of Jamaica were not complied with.

He claims he did nothing wrong in bailing Hill, who was a long-time family friend.