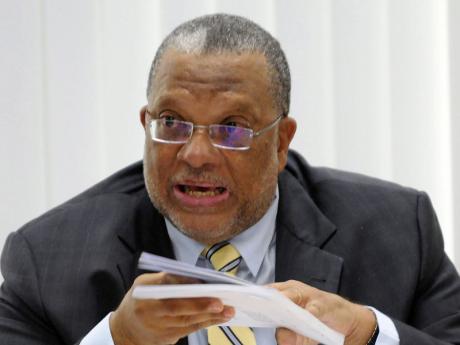 Finance and Planning Minister Dr Peter Phillips is upbeat that Jamaica has cleared all the hurdles to successfully complete the first year of the economic support programme with the International Monetary Fund (IMF).

A staff mission from the Fund completed the fourth quarter review as well as an Article IV assessment on Friday, declaring that Jamaica's overall economic performance under the programme remains strong, the minister said.

"It's important to note that Jamaica has not only successfully concluded the three previous tests but that we have successfully completed, at least from the point of view of the staff mission, all four tests involved in the first year of the programme," Dr Phillips told a press briefing at his ministry's Heroes Circle, Kingston office on Friday.

"It's important to emphasise, too, that the economic outlook for the country is improving, even though there are important challenges that remain," he said.

"Since the start of the programme in early 2013 crisis risks have receded, growth has resumed, net exports are stronger, our balance of payments is stronger, inflation has been brought under control and (Net International) Reserves are starting to recover," he added.

The current IMF programme lasts for four years and according to Dr Phillips, "we need to ensure that in the course of the next year the critical challenges are tackled with the same effectiveness as we have tackled those problems and issues that confronted us in the first year."

While maintaining a prudent fiscal stance and sustaining the gains of fiscal consolidation, the second year of the programme includes additional measures to enhance the ease

with which the private sector can conduct business, the minister said.

It will also focus on institutional arrangements to ensure the effective implementation of the fiscal rule and public-sector modernisation.

In addition, the Government will be pursuing reforms to further strengthen the financial sector and to advance the implementation of major catalytic growth projects.

Dr Phillips said the Budget which has been passed for fiscal year 2014/15 is consistent with the programme target of a primary balance of 7.5 per cent of gross domestic product (GDP), as well as with the objective for a further reduction of the debt-to-GDP ratio to below 100 per cent by fiscal year 2019/20.

The documentation of Jamaica's performance under the extended fund facility to date, as well as the plans to meet the goals of the four-year programme are outlined in a letter of intent which will be submitted to the IMF executive board in June.

"Given the country's strong performance and continued commitment to the implementation of the programme thus far, we anticipated that the board of the IMF will complete its fourth review and approve the disbursement" of an additional SDR45.95 million or approximately US$71 million under the arrangement, he said.

Dr Phillips said all the fiscal and monetary performance criteria were attained for the March 2014 quarter, with the exception of the indicative target on tax revenue.

However, head of the IMF mission to Jamaica, Dr Jan Kees Martijn, addressing the same press briefing, said execution of the 2013/14 Budget was on track because shortfalls on the tax collection side were offset through strict expenditure control.

He said the economic outlook is improving and overall policy implementation remains strong.

The fourth quarter review is subject to approval by the management and board of the IMF.