How important is your doctor's clothing? 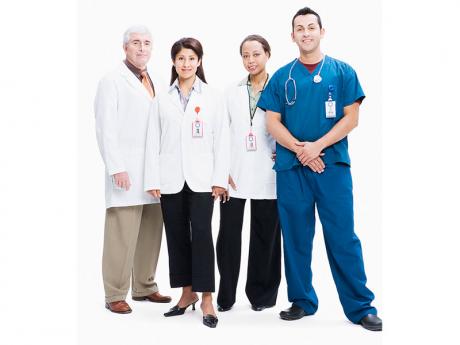 Faith is still a very important part of the healing process. Our belief in a person or system will influence its impact on us. Most of us expect doctors to assume a particular physical appearance. Doctors are expected to be formally dressed and appear clean and tidy. But how important is this?

Many of us still hold traditional values and look up to our doctors. We don't expect to step in our doctor's office and see him dressed in sweatsuit and running shoes. That would certainly generate a lot of raised eyebrows, and possibly even lack of faith, as they may see this as an indication of not taking the profession seriously.

The traditional clothing of a doctor in Jamaica is a 'bush jacket' but a shirt and tie is also accepted as respectable. Of course, whether the doctor works in a hospital or in an office will probably influence the acceptability of his clothing and also whether he or she was chosen by the client or not.

Other aspects of a doctor's physical appearance are also perceived as important in our society. It is expected that minimal jewellery be worn, minimal colouring and a fairly simple hairdo. The Rastafarian hairdo is becoming more acceptable, especially for females. Wearing of an earring by male doctors is starting to be practised, but is not yet broadly accepted. Our medical school still has a dress code for medical students, which is in keeping with the traditionally accepted attire.

Safety is another important aspect of a doctor's attire. This aspect has implications for the doctor him/herself, the client and the doctor's family. Because doctors sometimes work in potentially hazardous environments, their clothing may be depended upon to provide some level of protection. They may also have to deal with potentially infectious material and persons, and there is always the risk of becoming contaminated by germs and then pass these germs on to unsuspecting persons, especially patients and even their family members.

Some authorities recommend that doctors should exercise caution when they wear items of clothing below their elbows while on the job, as these may come into contact with germs and be passed on. These include long-sleeved coats and shirts, watches, rings, and bracelets. Ties may also be included. Health-care workers need to take precaution to minimise the risk posed by these items. A doctor's clothing is more than what meets the eye