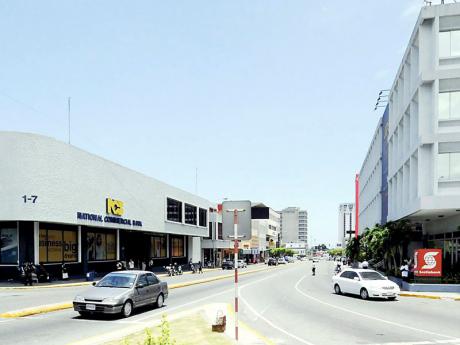 NCB's Knutsford Boulevard branch in New Kingston is seen on the left.-File

National Commercial Bank Jamaica (NCB) has lost a legal bid that began nearly 15 years ago, seeking to hold businessman Dexter Chin accountable for a debt of $56.27 million owed to a third party.

Although NCB lost the claim with costs awarded to Chin, judgement was entered in favour of the bank on a counterclaim filed by Chin, with costs. The businessman had sought a declaration that the interest rate on the note was excessive and that the debt instrument be set aside, but the court ruled that there was no evidence to support the claim.

MTI as a money trader and moneylender had extended facilities to Camway, a company managed by Chin.

MTI first sued Chin, who had presented to the company a number of cheques which were lodged to Money Traders' account at NCB, but those cheques were returned by the drawer's bank.

This resulted in MTI, which had an account at NCB Knutsford Boulevard, becoming indebted to the bank.

According to the judgement issued by Justice Hibbert, Chin issued a promissory note to MTI for J$63.35 million plus interest at the rate of 75 per cent per annum, dated from May 6, 1997 and payable on demand to the order of MTI.

NCB claimed that on the same day MTI unconditionally endorsed the promissory note to the bank.

Relying on the promissory note, in September 1999, NCB filed suit against Chin, Money Traders and three other persons the bank said were guarantors. The bank said that the demand for settlement of the debt having only been partially met, it sought to recover from the defendants the outstanding sum of $56.27 million.

In February 2000, Chin filed a defence and counterclaim stating that the promissory note was void and unenforceable. He contended that the note had not been endorsed by MTI to NCB and as a consequence the bank had no right to sue.

Chin said that MTI was the sole beneficiary under the note up to June 17, 1997 when NCB sought unsuccessfully to be joined in the MTI suit against him.

During the trial which began May 2012, Ian Watson, a manager at NCB, gave evidence that MTI managing director Ewart Gilzene and chairman Conrad Graham signed a promissory note endorsed to NCB during a visit to the Knutsford Boulevard branch on May 14, 1997. He then placed the note in the custody of the bank.

The witness said the note for $63.35 million bore Chin's name as the promissor.

Watson testified that he knew MTI had filed a suit against Chin; that he thought it pertained to money Chin owed MTI, but was unaware that the suit was based on the promissory note.

He said, however, that the amount of money MTI owed NCB was the same amount mentioned in the suit MTI filed against Chin.

Denise Kitson, QC, who represented NCB, argued that even if MTI had purported to sue on the promissory note, it had no legal right to do so and that such a suit could not affect the rights of NCB, which acquired all the legal rights to the note on May 14, 1997 and was therefore entitled to enforce payment against Chin.

Chin's attorney Gordon Robinson argued that it was for NCB to prove, as it alleged, that it was suing under a valid and enforceable note.

Watson admitted knowing that NCB sought to be joined as a plaintiff in an appeal in which Chin sought to set aside summary judgement entered against him in the MTI suit. NCB's application could only mean that it was asserting that it was entitled to the proceeds to be realised from a judgement against Chin in the suit brought by MTI, the judge said.

"This could only be so if the MTI suit was based on the same promissory note as that which is now the subject in the present suit," he said.

Justice Hibbert ruled that when NCB took possession of the promissory note it must have known that it was already dishonoured and so was not entitled to sue on the note.

The Court of Appeal had discharged the summary judgement against Chin and ordered the case to be tried. However, instead of proceeding to trial, MTI abandoned the suit. NCB then sued Chin and MTI.

"I am of the view that this suit was only filed on 15 September 1999 because of the failure of MTI to successfully defend at the Court of Appeal, the summary judgement which had been issued in its favour," the judge said.