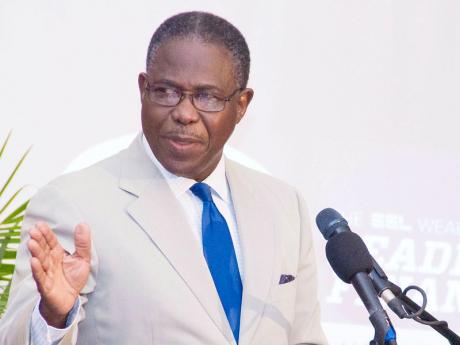 Given Peter Phillips' resoluteness and propensity to focus, I never doubted that the Government would do whatever it took to meet the quantitative targets set under its agreement with the IMF. Unfortunately, that is not the end of the matter.

The minister would be the first to acknowledge that the targets are already becoming increasingly difficult to achieve, and the political hurdles to meeting them are getting progressively higher. The strong public resistance that led to the retraction of the proposed bank withdrawal tax is just the first event of the inevitable pushback against what will be ever more desperate efforts by Government to squeeze taxes out of an economy of diminishing means.

It now seems to be accepted that without economic growth, the need to generate a primary surplus of 7.5% of the economy each year, essentially to pay down our debt, will leave Government no choice but to squeeze more and more revenue out of the people or provide less and less of the services they have paid for, or both - all of which will deepen poverty, particularly among the poorest, who have the least ability to avoid taxes and the greatest need for government services.

As the economy remains stuck in anaemic growth mode, the virulence of public revolt will intensify. And if a way to bring dynamic growth to the economy is not found, the IMF programme will ultimately fail. This is why the IMF itself now cites economic growth as the priority for the sustainability of the economic recovery programme.

What is not altogether clear is whether everyone is aware of what will be required if we are to generate meaningful growth. Today's wide-open global economic environment demands not only that the costs contained in the goods and services we produce be competitive but that our competitiveness be sustainable.

To be sure, governments have acknowledged the importance of reining in uncompetitive direct cost factors such as energy, and have been attempting to address them, albeit in a bungled and confused manner. But there are two highly critical, though less obvious elements, without which competitiveness, even if achieved, cannot be sustained.

They are the characteristics that underlay the world's most productive, competitive and stable economies. They hold a society together in harmony and peace. And they are achieved primarily by making the development of people the central focus of economic policy. Yet neither factor has so far been at the centre of governments' economic policy.

It is, therefore, noteworthy that in the recently concluded Budget Debate, they received prominent attention from both sides of the aisle.

Opposition Leader Andrew Holness expressed the view that the development of the intellectual and technical capacity of our people should drive the country's economic future. Finance Minister Peter Phillips, in closing the debate, lamented the negative effect the near total absence of social capital has had on our ability to advance our economic interests.

To some, these subjects may seem esoteric and irrelevant in the context of our suffocating debt. But the inadequate education and discipline in our workforce and weak social capital have been among the main contributors to our chronic indebtedness and sad economic state.

It will take far more than the government spending and borrowing less to put our economy on a sustainable upward path. The world's most successful economies of all sizes demonstrate that an educated population operating in an environment with strong social capital is the touchstone of economic success.

Ultimately, it is human input that determines economic output. Mr Holness is, therefore, correct in the belief that Jamaica's best hope for economic success is to develop the productive capacity of our people. This must, therefore, become the highest priority of Government. He is also right in the view that for greatest effect, our education system should be harmonised with our economic strategies. This must be done in tandem with a concerted effort to build trust, respect and discipline among our people to foster social capital, as Dr Phillips would like.

The value of people development to economic development is best appreciated by looking at the differing impact that the various types of foreign direct investment (FDI) can have on an economy.

FDI is attracted to a country for three principal reasons, namely, to gain access to:

a valuable natural resource, or

the productivity of people.

Market access is of little relevance in the case of a small developing country like ours, unless augmented by access to larger markets through easily exploitable trade agreements.

With that in mind, the value of Mr Holness' and Dr Phillips' positions may be illustrated by comparing the economic effects of investments made solely to exploit natural resources to those attracted by the productivity of people.

Costa Rica landed the investment by Intel, the world's leading microprocessing firm, because of the importance Intel placed on the productivity of the Costa Rican people and the strength of the country's strong social capital.

Intel's investment was eagerly and aggressively sought by much larger and better-located countries like Mexico. But it was the country with the most educationally prepared population and the highest level of social cohesion that was chosen. In 2006, Intel's accumulated investment of US$770 million contributed more than US$ 1.1 billion to Costa Rica's GDP.

As valuable as the large foreign investments in the bauxite-alumina industry have been to Jamaica, in 2006, the more than US$4-billion value of the industry's assets contributed just US$400 million to our GDP. The entire industry's contribution to Jamaica's GDP was just about one-third the value of Intel's contribution to Costa Rica's GDP; despite the fact that the value of the bauxite-alumina investments was more than five times the size of Intel's.

The productivity per dollar of Intel's Costa Rican investment in GDP terms was 14 times greater than that of the bauxite-alumina industry in Jamaica. It is a difference that properly demonstrates the comparative benefit of investments in people over investments in natural resources.

However, to attract that kind of investment in our people, we must follow the Holness-Phillips prescription of investing in people while building social capital.

The high educational level of Costa Rica's labour force, its stable political system and relatively corruption-free environment should serve as Jamaica's inspiration if we are to create a vibrant and prosperous society. If individual leaders of the PNP and the JLP can recognise and promote these valuable ideals for our country, it should be possible for them to agree that these are non-negotiable national goals and join together to pursue them.