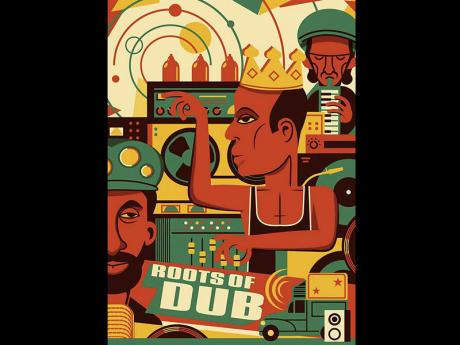 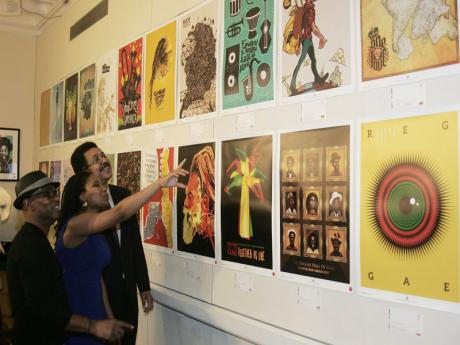 Ambassador to the United States, His Excellency Stephen Vasciannie (right), listens attentively as member of the International Reggae Poster Contest (IRPC), Kathryn Buford (centre), explains the significance of one of the posters on display at the Embassy of Jamaica last year. Looking on (at left) is founder of the IRPC, Michael Thompson. -Photo by JIS
1
2

In an age where music is as much seen as heard, on July 1 there will be yet another combination of sight and sound in the long history of Jamaican popular music.

One side of the union - International Reggae Day (IRD) - has a much longer track record, having been started in 1994 by Andrea Davis of Jamaica Arts Holdings. New kid on the block is the International Reggae Poster Contest (IRPC), started by Jamaican graphic artist Michael Thompson and Greek designer Maria Papaefstathiou in 2011.

In this case, though, age is not a marker of imbalance. And it is not a coincidence that both have 'international' and 'reggae' in their names. So when IRD is celebrated on July 1 this year, it will also mark the opening of entries to the IRPC.

"It is an international contest and we are reaching out to the world in terms of content. It seems natural that we strengthen our impact with Reggae Day and it can also spread the word in Jamaica," Thompson said.

Normally entries to the IRPC would be opened much later in the year. Thompson said over the contest's two years there have been over 2000 entries from 90 countries. In the first year there were about 30 submissions from Jamaica. That fell dramatically to single digit figures last year. Underscoring the low Jamaican submissions, Thompson said there were 100 entries from Iran.

Still, one of the Jamaican entrants, Tahj Francis, earned a fifth-place finish.

Not only does Thompson hope for a rekindled Jamaican interest in 2014, he also has a long-term intention for the IRPC which is conceptualised as a sight to behold. The IRPC organisers intend to establish a museum space celebrating Jamaican music in Kingston.

"You can get people to go to Jamaica to a reggae museum," Thompson said, noting that the building itself, in terms of its design, would be a part of that pull.

"There has to be a physical space, so Jamaica can benefit from the additional value, with the narrative."

This thrust is encapsulated in the contest's theme, 'Towards a Reggae Hall of Fame: Celebrating Great Jamaican Music'.

"It would be the best thing for Kingston. We think Kingston can attract a large number of tourists, just like the North Coast," Thompson said.

Thompson said there have been seven IRPC exhibitions so far, the next one slated for an Organisation of American States building in Washington, DC, on Thursday.

While the exhibitions are not fund-raisers for the intended museum, they raise awareness of the intentions to create the museum, hopefully among people who have access to funding.

"We meet a lot of important people along the way who can reach to the people with deep pockets," he said.

However, there is also an existing institution which has benefitted from the sales of posters at IRPC exhibitions - the Alpha Boys' Home. Thompson said "without Alpha we would not have reggae in Jamaica", pointing to the musicians it produced and the institution's role, especially in early studio bands.

So far, about US$10,000 has been raised for the school through poster auctions.

Not only will the 2014 IRD celebrations on July 1 mark the opening of IRPC entries this year, it will also celebrate those which have been submitted since it started. It will also feature the launch of the digital IRPC IRD Global Reggae exhibit, selected from entries in 2011 and 2012.

There is also an Alpha tie-in with this year's IRD celebrations. The school is one of this year's honourees, along with singer Marcia Griffiths and graphic designer Neville Garrick.