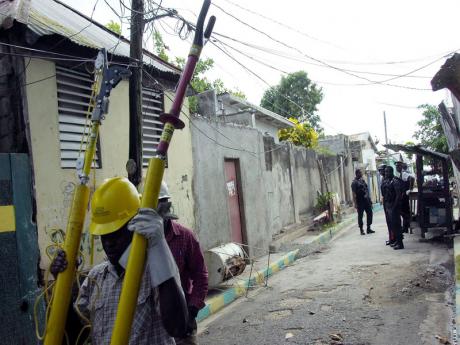 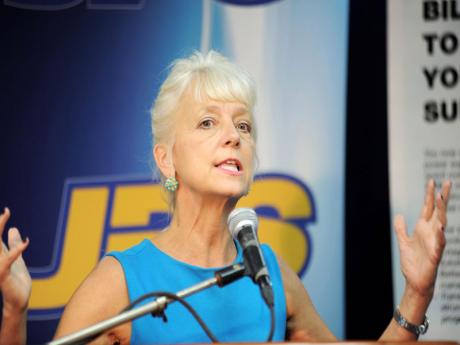 JPS CEO Kelly Tomblin gestures on May 15 during a press conference detailing the losses her company has sustained because of power thieves. - Jermaine Barnaby/Photographer
1
2

Did the Jamaica Public Service Company (JPS) really think it could get away with its blatantly, transparently and unmistakably daring act of illegality? Did it calculate that people with access to social and traditional media would be complicit with its disregard for the rights of its paying customers who happen to be condemned to targeted inner-city communities?

Was the announced programmed blackout of certain communities because up to 70 per cent were not paying for electricity a serious strategy or just a gauge for public reaction? Was it to jolt us to the urgency of the crisis facing the power company and spur politicians into finally coming together to do something about it? Was that the strategy, or did the Kelly Tomblin-led company really believe civil society, and media especially, were so quiescent and inner-city communities so stigmatised that no one would dare speak up for law-abiding, utility-paying citizens there?

Could frustration cause well-trained, educated people to make such a disastrous decision that plunged their organisation into the dark ages of management and incurred such widespread wrath against their brand? I don't envy Winsome Callum's public-relations job at this time, trying to repair an image so tattered after this recent resort to Herodian methods.

Perhaps JPS, seeing how much successive governments have got away with and how much pressure they have heaped on the backs of poor Jamaicans without revolts and mass street protests, decided to follow the tradition of taking liberty with poor, marginalised Jamaicans. Many have made the point repeatedly since JPS announced its dark policy early this week: You can't use illegality to curb illegality. You can't cheat on your own contract to enforce your own. It is clear in the licence granted to this monopoly under what terms it may discontinue service to any customer. Not one even slightly suggests that what it began doing is allowable.

And JPS officials had the nerve to flatly reject the demand of the Government to cease its illegal activity and only did so after the regulator ordered it to do so. So did JPS really think it could get away with this, or was there some method in its madness? Like finally getting that task force established to deal with its problem of mass delinquency?

Let's make it clear: While we must condemn JPS's illegal and out-of-order action and be appalled at its stunning public insensitivity, it has to be asserted that JPS is a private business that has to make a return on its investment. It has a right to be repaid for its services. It must send a clear and potent signal that enough is enough and that something has to be done - and done now - to deal with
widespread electricity theft, in certain communities in
particular.

Being in an inner-city community should
give you no immunity to bill-paying. This issue of wide-scale and
cavalier stealing of electricity is part of a larger phenomenon of
social decay and the normalisation of deviance. It is part of the legacy
bequeathed to us by a corrupt and sinister political culture which has
fostered garrisonisation and criminality. The stealing of electricity in
these communities is not isolated from a general attitude of dependency
and clientelism which has been nurtured and fed by our political class.
People have a sense of entitlement and no qualms about 'tekking a
likkle light'. A nuh nutten.

Which investor is
cheerful about investing in a country where whole sections of
communities feel at liberty to steal his services, wantonly destroy his
equipment and even kill his employees if he dare try to get people to
pay for what they have consumed? Poverty is no excuse for
criminality.

We
have to take a balanced view on this issue. We have to recognise JPS's
problem as part of a wider national challenge with law and order. Our
national security minister, Peter Bunting, in his Sectoral presentation
in Parliament last week, took time to acknowledge our social rot and
politicians' contribution to it. He talked openly about "the connection
between elements of both political parties and criminal gangs and dons.
Criminals would support party candidates and were often rewarded with
works contracts. Hopefully, the worst days of this criminal
gang-politics nexus are now behind us, but we must acknowledge our
(politicians) contribution".

Our politicians have
played a major part in weakening our social structures and in fostering
dysfunctionality, but people have agency and individuals can't escape
total responsibility either. As Bunting said further: "In Jamaica, we
have developed a subculture of violence and lawlessness that has been
reinforced and promoted by segments of our society ...
."

While we condemn JPS's action and could never
condone a wrong to correct a wrong, we must deplore the fact that a
company which has invested in our country and which has a legal right to
expect a fair return on its investment was forced last year to remove
more than 197,000 illegal lines and carry out more than 113,000 account
audits and meter investigations to deal with this epidemic of
electricity theft. Shame on us. More than 12,000 were arrested last year
for electricity theft. I support the JPS in calling for raising the
fines for electricity theft, and I say one of the things its executives
have a right to demand is that the legislation be changed with IMF
speed! The Government owes that to JPS.

Yes, JPS
should invest in technology that would enable it to sell electricity
like how prepaid cell phone calls are sold. Yes, it should find ways to
prevent electricity theft, but ultimately, these investments exact high
transaction costs which legal customers have to pay for. It would be
easier and cheaper for the business and for the rest of us paying
customers to have our fellow citizens do what is
ethical.

No room for ethics

But
ethics has a low value in this society - downtown and uptown. And don't
believe it is just poor people, sufferers who can't do better who steal
electricity in these inner cities. Many who can afford to pay and who
splurge on other things see no reason why they shouldn't steal from 'the
big man who runs JPS'. They have no compunction at all over stealing
electricity. It's a culture in some of these communities. Children grow
up knowing you don't pay for light and water, and sometimes, even rent.
Some justify it by saying, "The uptown people dem a tief to and nobody
nah trouble dem." Big man with big supermarket a tief, but dem use
another word, 'bypass'. Inna ghetto dem call it
tief.

You notice how, unusually, Parliament was in
unison and how both sides banged desks together on Tuesday in defending
their constituents in these garrisons? No quarrelling between them and
no raucous behaviour over that issue. Let them unite similarly to help
JPS to successfully remove illegal connections, without having them put
up back.

But quite frankly, I believe the politicians
can have some impact only if they have garrison control and use
strongmen and dons to enforce their rules. Only dons or so-called
community leaders will make any difference in these communities. If you
think moral suasion and preaching Sunday-school morality and 'thou shalt
not steal' is going to make a difference, I have a piece of land at
King's House to sell you.

Politicians going in there
and urging people, "Please pay your light bills," will make little
difference. "Dem can chat anything. Dem can pay dem $50,000 a month
light bill at taxpayers' expense," many of these inner-city people will
say.

JPS's frustration, which led it - like other
frustrated Jamaicans - to illegal action is a symptom of a larger social
crisis.

Ian Boyne is a veteran journalist. Email
feedback to columns@gleanerjm.com and
ianboyne1@yahoo.com.