The real meaning of devaluation 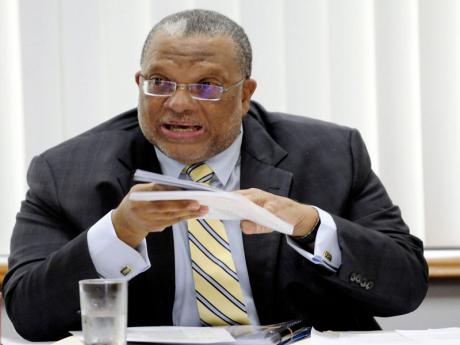 In his 2014 Budget presentation, Audley 'Are You' Shaw promised our problems would disappear as soon as we stop the dollar's slide.

I'm sick and tired of what passes for political debate in Jamaica, but I'm particularly sick (and tired) of local debaters' penchant for the use of unnecessary complexity. It seems to be more important that these egocentrists use as many multisyllabic, technical terms possible than educate their audiences. Why?

For example, I've stopped trying to teach Booklist Boyne that words like 'neo-liberalism' mean absolutely NOTHING outside the four corners of the economics textbook from which he copied them. On Sunday last, reading like a man desperately trying to re-establish his own relevance, he wrote: "There is need ... for a knowledge-based, intellectually rigorous journalism that isn't defined in terms of just confronting and contesting what's wrong." That's 22 words stretching right around the mulberry bush when one would do. Somebody please whisper to Booklist that "knowledge-based, intellectually rigorous journalism" is an overly complex way of describing reasoning. Tediously quoting from highbrow books is regurgitation, NOT reasoning.

The Gleaner has a knowledge-based, intellectually rigorous journalist in Martin(et) Henry. You'll easily agree or disagree with Martinet's conclusions because his thought process is always clearly set out. Booklist appears unable to think for himself, so he covers up with complex obfuscation, political spin doctoring and, of course, book titles galore. I recommend he try getting a real life. Real-life experiences teach more economic truths than any book. Real life teaches us the KISS principle (Keep it simple, stupid!)

Political leaders want to keep devaluation complicated because, if we understood it, we'd know that (like garrisons) they created the monster and now can't control it.

Today, every time a politician speaks on devaluation, he/she complicates. Peter Phillips: "... Adjustments that have been made to the Jamaican dollar will allow what we produce to be more competitive in external markets and ... allow us to develop what we can produce in Jamaica ... ."

But Government hasn't made one single "adjustment". The dollar is devaluing like a runaway train and Government is but a panicked passenger. It's true that devaluation, in economic theory, results in more for exports. But, in real Jamaican life, that's a dangerous illusion. First, that "more" for our minimal exports is but a drop in the large bucket of foreign exchange we spend for imports. The resulting deficit is exacerbated because even our paltry exports are themselves produced with more than 80% of imported inputs. So, in reality, we import even our exports. Devaluation is killing us, NOT making ANYTHING 'competitive'.

Exports only a quarter of imports

In the midst of this simplicity, what was the JLP's prescription? 'Are You' Shaw proposed more illusion. He suggests we wave a magic wand (fixed exchange rate), ignoring the fact that our insipid production doesn't earn enough net foreign exchange to support a fixed exchange rate.

Dipping into his magic hat, he quoted from an IDB policy paper written by Inder Jit Ruprah:

"It's argued ... that expenditure cannot be switched from tradable goods to non-tradable goods in [Caribbean] countries. There's no switching effect of a devaluation, either in expenditure or production. Therefore, a real ... devaluation only depresses real income ... . Worse, a devaluation could result in stagflation, i.e., reduce economic growth and increase inflation. There's a high pass-through effect, i.e., the effect of a nominal devaluation on domestic inflation. The pass-through effect is higher ... where the portion of imported goods in the consumer price index and imported inputs is greater [my emphasis] and monetary policy is more accommodative.

In addition, an unexpected external devaluation adversely affects a balance sheet if debts are denominated in dollars while firms' revenue is in local currency ... . This deterioration ... limits the firm's ability to borrow, and borrowing becomes more expensive as the risk premium increases.

Thus, the balance sheet effect has a dampening impact on economic growth.

No matter how
often you read that, you won't find one word supporting a fixed exchange
rate for countries like Jamaica. The author, with whom I agree,
criticises the conventional wisdom of devaluation's "benefits". The
issue is: What to do about it?

Once you understand the
simple reason WHY devaluation occurs (balance-of-payments deficits too
large to be hidden by artificial support systems) and why our
devaluations are wholly detrimental (even our exports are mainly
imports), you'll appreciate there's only ONE WAY to tame the devaluation

it no good
fe de country.

It will be
progress for everyone.

We
MUST find a way to stop the perpetual devaluation. But it won't be
stopped until we severely cut our import bill and produce more locally.
Why are we feeding US tourists imported porterhouse
steaks?

We mus' stop our
dollar from slide

so we can plan
our future with pride.

for Jah to be in the
hearts of many.

Michael
Manley had the right idea in the 1970s (implementation slightly flawed)
and, had we stayed THAT course, we'd be OK today. Among his many errors
was the sudden execution (should have been phased); accompanying
rhetoric; and the lack of empathy for those who, accustomed (for
example) to imported tampons, drove hundreds of miles or took airplanes
rather than consider doing without.

No dilly-dally wid de
dollar we need stability to
reign.

A few have shown the
way

for a brighter
day.

Let's put our resources
together

and come together as
one.

No need for personal
gain

if our country is to
achieve.

production is what we
need.

It was 1991 when
Government 'liberalised" the currency, thus creating an uncontrollable
'adjustment' from J$8 to US$1 in January to J$21.50 to US$1 by year end -
a drop of more than 250%. It impoverished almost every citizen and
changed values and attitudes for the worse. Formerly honest, reliable
clerks began embezzling from their employers rather than accept the
sudden lifestyle adjustment shock. 'Robot' buses and taxis started
racing each other to the next stop and fighting over every passenger.
BOJ 'agents' filled their trunks with cash and bought US$ on the black
market.

By
August 1993, the exchange rate was J$26 to US$1 and Eric 'Mr Festival'
Donaldson wrote, sang and entered Festival with Big It
Up, bluntly telling Government that only production would stop
the dollar slide. It became the fifth of his six Festival wins. HE
understood. WE who made him the winner that year understood. Like Eric
Williams, GOJ turned off its hearing aid.

Instead,
governments used every conceivable trick to artificially stabilise the
dollar. The result? The dollar further slid from J$26 to US$1 to J$110
to US$1. When will our leaders see the light; stop playing transparent
magic tricks; and do what's necessary to stop this everlasting
devaluation? I know, I know. Me, teacher! Me, teacher! When unrepentant
sinners must carry winter clothes with them to the
grave.

Gordon
Robinson is an attorney-at-law. Email feedback to
columns@gleanerjm.com.