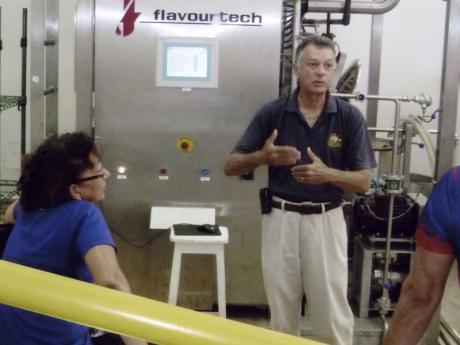 Tony Freckleton gives a tour to the St Elizabeth Flavours Project, which has been hobbled by a lack of government support. - Contributed

The Gleaner editorial of Sunday, May 11, 2014, in reflecting on the proposed move of UTech's current president, Professor Errol Morrison, to head the National Council of Science and Technology (NCST), headlined the upcoming move with its banner headline 'Morrison good man for the job'.

While in no way wishing to detract from the potential of Professor Morrison doing a good job as the new president of the NCST - which, incidentally, is a new job title - as the prime minister formally represents the titular head as chair of the council.

In lauding Professor Morrison's potential as the new operational leader of the NCST, The Gleaner resorted to scurrilous and rude name-calling in referring to UTech, the institution that Professor Morrison is leaving, where "he played a large part in transforming that formerly sleepy school".

UTech represented the transformation of the dynamic College of Arts, Science and Technology (CAST), which had been granting its own degrees for some 10 years before being formally named a university in 1995. The university has had three presidents as its leaders:

I return now to the 'sleepy school' epithet The Gleaner has labelled UTech with before Morrison's transformation. The following few pre-Morrison items may be of interest in setting the record straight and challenging The Gleaner.

An item that Professor Morrison echoed was the vision of Chancellor Edward Seaga for a University of Jamaica (UOJ). He invested resources in seeking to move this idea forward with meetings and discussions with many of the tertiary colleges. Unfortunately, petty jealousies and a seeming fear that UTech would dominate the proposal seemed to have intervened, and the project seems to have collapsed for now. Education ministry adviser Dr Franklin Johnston is now suggesting - rather late in the day - that tertiary institutions should stop duplication. Perhaps the ministry has some ideas on the matter. Whatever else must be said, it should avoid undue bureaucratic duplication as now obtains with J-TEC and UCJ.

I return to the NCST and the potential for Professor Morrison's leadership. A few words of history may be useful for Errol. The NCST has had a chequered career. Launched with a good deal of fanfare and good intentions by former Prime Minister P.J. Patterson, it started well with a significant capital base and a number of islandwide science and technology projects.

Based as it was in the Office of the Prime Minister with commissioners appointed by the governor general's office, it was clearly intended to have a significant national stature. Unfortunately, decline has been the order of the day.

NO SENSE OF URGENCY

There is one shining light in all the surrounding darkness that is the NCST. I recommend that Professor Morrison address this as his first priority.

I refer to the St Elizabeth Flavours Project. The project was one of the first, at the early NCST, and one of the only ones that I know that has survived. It is based in Bull Savannah in St Elizabeth.

The project involved the importation of specialised high-technology distillation equipment from Australia, which enables the plant to distil and prepare flavours from a variety of fruits. The plant also has the capacity to produce material for a school feeding programme and did have some success there.

I pay tribute to Tony Freckleton, who has struggled with the project over many years. Here are some of Tony's complaints:

Despite the numerous challenges, a number of nutraceuticals have been developed and successfully tested, both locally and abroad, which could go a far way in reducing our imported bill for medicinals.

This is a project which, if properly supported, maintained and developed, has the potential for revolutionising farming in Jamaica.