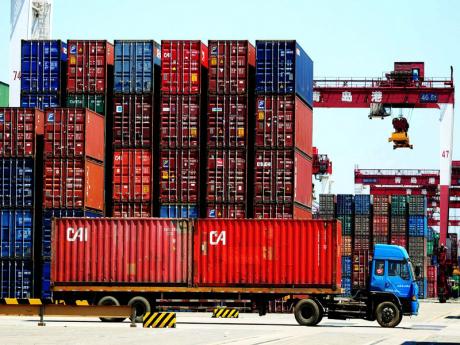 In this May 3 photo, a truck drives past containers at a port in Qingdao in east China's Shandong province. China's trade rebounded in April, with customs data showing exports rising 0.9 per cent, recovering from March's 6.6 per cent decline. - AP

My father, Percy, who was born in China, while adapting to (and adopting) Jamaica, was very nationalistic (relating to or showing a belief that your country is better and more important than other countries - Merriam-Webster) at heart who took great pride in the accomplishment of his native land.

He was, I am sure, far from unique among Jamaican Chinese in this respect. Just like Jamaican citizens of America or Britain, or any other country for that matter, who take great pride in anything good about Jamaica a la Usain, Shelly-Ann or Tessanne.

Poppa would subscribe to a number of Chinese magazines, including, I remember, China Pictorial. While most of the others were mainly filled with Chinese writing (characters), this one, as the name suggests, comprised photographs with short English captions. We children, not knowing a word in written Chinese, took pleasure in looking at these photos.

They were mainly focused on China's military might, the masses, including schoolchildren, supporting the regime and its infrastructural (dams, factories, schools, etc) accomplishments.

One could sense the torn sentiments that Poppa, who left China before 1910 and who died in 1973, had between the communist regime led by Mao Zedong and the Chiang Kai-Shek nationalists in Taiwan.

Nevertheless, I knew that he was proud of China and wanted it to be number one - again. He would, therefore, have been especially proud of the economic powerhouse China has become, being now the world's No. 2 economy.

He would be even more proud to have read the headline, 'China poised to pass US as world's leading economic power this year'.

That was the headline of a Financial Times piece published April 30, 2014,written by Chris Giles, economics editor.

The US is on the brink of losing its status as the world's largest economy, and is likely to slip behind China this year, sooner than widely anticipated, according to the world's leading statistical agencies. Most economists previously thought China would pull ahead in 2019.

After extensive research on the prices of goods and services, the ICP (International Comparison Programme hosted by the World Bank) concluded that money goes further in poorer countries than it previously thought, prompting it to increase the relative size of emerging market economies.

The estimates of the real cost of living, known as purchasing power parity, or PPPs, are recognised as the best way to compare the size of economies rather than using volatile exchange rates, which rarely reflect the true cost of goods and services: on this measure the IMF had put the US GDP in 2012 at $16.2 trillion, and China's at $8.2 trillion.

In 2005, the ICP thought China's economy was less than half the size of the US, accounting for only 43 per cent of America's total. Because of the new methodology - and the fact that China's economy has grown much more quickly - the research placed China's GDP at 87 per cent of the US in 2011.

With the IMF expecting China's economy to have grown 24 per cent between 2011 and 2014 while the US is expected to expand only 7.6 per cent, China is likely to overtake the US this year.

Of course, PPP is not nominal GDP, by which latter standard, the US is still much larger than China. Nevertheless, even by this 'higher' standard, China is set to pass the US in 2026 by some estimates.

If we can imagine a united China, thus adding the economy of Taiwan, that would certainly cut down on the time it would take for China to catch and surpass the US as the pre-eminent superpower - economically.

Senator Ruel Reid has expressed concern over the current set-up of the education system, which he says favours early starters.

"We are in post-discussion of Minister (Ronald) Thwaites' announcement on some changes to GSAT (Grade Six Achievement Test), which is quite interesting, because how the education system has been structured, to be frank, it really favours the early starters; the people like Usain Bolt who can bolt and get out of the starting blocks very quickly," he said.

"Terminally at age 16, 17, a number of persons, particularly our boys, may not have been properly developed cognitively, so I have a difficulty fundamentally with the design of the education system," Reid continued.

"GSAT was redesigned because, the fact is, we had limited college places, hence they broadened the curriculum for science and social studies with the hope that fewer and fewer students would get higher grades. The less [sic] students who have higher grades makes it easier to place them in the few traditional high schools that existed," Reid said.

"So we have a system that gives people a false impression sometimes that the rest of them are failures. It is not that they are failures, but it is how the system is designed, as some persons need more time to bloom; some are late starters. It is not where you are coming from, but where you are going," he added.

This is so true. I know, for I have experienced it first-hand.

While far (I hope) from being dumb, I was not academically inclined at a tender age. In that pre-GSAT (Common Entrance) age, even if you did get into a 'traditional' high school, you were often 'forced' into streams, from first form, that were not suitable or where the student was not exposed enough to even make an intelligent decision.

My situation was further compounded by the fact that I was told I could sit Common Entrance a year earlier, thus missing the entire last year (grade six) of prep school. At Campion Hall Prep School, there were four levels: Junior A, Junior B, Middle and Senior. Students sat Common Entrance in Senior.

I was still in Middle when I was told that my birth date made me just eligible to take the exam a year early. I had just two months to prepare. Thanks to my sister, Gail, who tried to teach me some of the new concepts of 'Senior', I passed for Wolmer's.

Since three of my brothers had/were attending STGC (my first choice), my mother got me transferred, and because my Common Entrance marks must have been far from great, I was immediately placed in one of the 'dumber' streams.

The long and short of it is that I took to the sciences (not so much biology) when introduced to them in fourth form. Being already 'streamed' in one of the not-so-bright forms, I could not take physics, chemistry or add maths, the purview of the brightest. I ended up taking an amalgam called physics/chemistry at O level.

There are, I am sure, quite a few readers who were late bloomers and who can attest to a similar experience.

The lesson of the story is that the system/authorities should be made more flexible, not only in allowing transfers, but also in permitting switching between streams within high school. This would provide a better match between students and their studies.