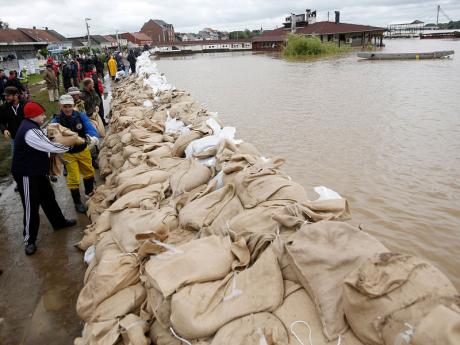 People build a dam made up of sandbags by the bank of the Sava river in Sremska Mitrovica, 90 kilometres west of Belgrade, Serbia, Saturday, May 17. Record flooding in the Balkans leaves at least 20 people dead in Serbia and Bosnia and is forcing tens of thousands to flee their homes. Meteorologists say the flooding is the worst since records began 120 years ago. - AP

A military plane carrying senior Lao government officials crashed yesterday in a wooded area as it approached an airport in the country's northeast, killing at least five people, including the defence minister and other high-ranking members of the authoritarian country's ruling party.

Lao National Television showed video of the mangled wreckage of the plane, with smoke rising from its badly charred remains. The footage showed rescuers pulling away pieces of aircraft debris and trying to dig through the remaining fuselage with shovels, as medical crews stood by watching.

About 18 people were believed to be on board the plane, which left Vientiane, Laos' capital, early yesterday morning to take the group to an official ceremony.

The Russian-made aircraft crashed in an area where authorities were "helping to rescue the survivors," according to Lao state news agency KPL, which cited an announcement from the Prime Minister's Office. The brief official statement did not say how many people had died in the crash or survived.

Among those confirmed killed were Defence Minister Douangchay Phichit and his wife.

Douangchay was also one of Laos' deputy prime ministers and a high-ranking member of its Politburo, the main decision-making body for the nation's all-powerful Lao People's Revolutionary Party, which has ruled the single-party state since 1975.

Others killed in the crash included Minister of Public Security Thongbane Sengaphone, Vientiane Governor Sukhan Mahalad and at least one other senior ruling party official.