'I still believe in God' 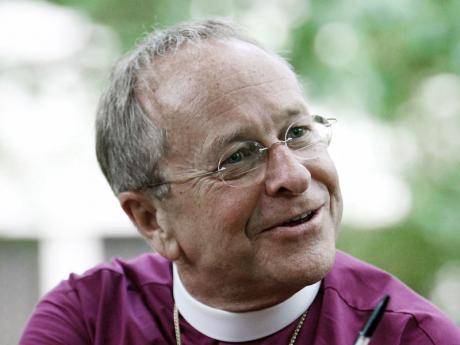 V. Gene Robinson, the openly homosexual bishop who once headed the Episcopal Diocese of New Hampshire in the United States.

Despite spending the past three years working the streets of Kingston as a homosexual prostitute, Toni Brownis still not convinced that his lifestyle is right.

Even more troubling for Toni is to balance his lifestyle with the Christian principles which he, like most other Jamaican children, was exposed to in his formative years.

"Mi have a little feeling say it kinda wrong, but God did done know weh mi a go come to before Him create mi," Toni told The Sunday Gleaner as he declared that he still attends church at times despite his lifestyle.

"If God did know say mi did a go do something wrong him wouldn't create mi, so mi nuh think say it wrong to all that," Toni reasoned.

Accepting that most Christians would be quick to cite biblical verses to condemn him for his sexual orientation and lifestyle, Toni is not worried because he does not place much faith in the Bible.

In a declaration similar to that of V. Gene Robinson, who became the first openly gay bishop in the Episcopal Church in 2003, the young prostitute said he made sure to pray every day as he values his personal relationship with God.

The religious underpinning is why he would encourage other young boys not to trod the road he has taken.

Toni reasoned that Jamaica is becoming more tolerant of homosexuals, but still he argued that the problems the young boys might face could result in them losing their lives.

"If somebody come out here young like 13 or 14 mi advise them fi go back home, because the road nuh nice," said Toni with his voice taking on a more sombre tone.

"A no every man who rush you a go lef you alive, some a dem a go kill yu. So mi tell the young boy dem fi gi di road a break ... and when dem still come out mi tell dem fi stand inna the dark, because people might pass from you community and see you and you can't go back home."