Too little from London law lords 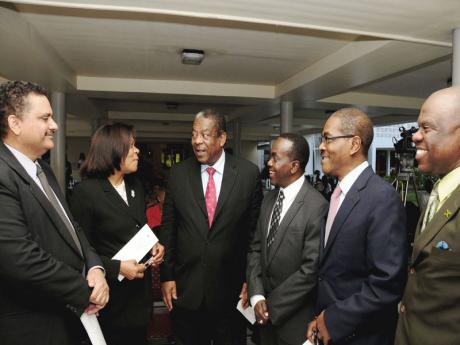 The Judicial Committee of the United Kingdom Privy Council, which remains Jamaica's final appellate court, has been pretty quiet in relation to the island over the past two years, as few cases have left Jamaica to be heard by the law lords in London.

This has fuelled fresh calls from the local the legal fraternity for the Government to move swiftly to sever ties with that court and move forward with the Caribbean Court of Justice (CCJ) as the country's final appellate court.

Panton was responding to Ben Wilson, head of communications at the Supreme Court of the United Kingdom, in response to questions from our news team.

The data show that, so far this year, the Privy Council has handed down one judgment in a murder case from Jamaica while permission to appeal was given in two other Jamaican cases.

Last year, the Privy Council heard seven appeals from Jamaica with judgments handed down in five of them.

The Privy Council in 2012 gave permission to appeal in a murder case and handed down judgment in five cases. Six judgments were handed down in 2011 while two appeals were decided in 2010.

For several members of the local legal community, many of the persons found guilty of crimes in Jamaica do not take their appeals to the Privy Council because it is inaccessible to the poor and expensive.

"I personally take very strongly to the fact that I have to pay to get a visa as a citizen of Jamaica to go to England where our final appellate court is. I think the leaders of this country should be ashamed of themselves to allow this to continue," added the president of the Court of Appeal.

Prominent attorney-at-law Bert Samuels agreed, as he also argued that the poor cannot afford to go to the Privy Council.

"My position is that it is becoming increasingly ridiculous to have the final Court of Appeal nine hours away by flying to get there and pay for accommodation in excess of $200,000. What this does is to make the poor unable to afford their appeal and excludes the majority of our people," said Samuels.

That was endorsed by president of the Cornwall Bar Association, Michael Erskine, who said Jamaica should have left the Privy Council a long time ago.

Erskine pointed out that very few cases are going to the Privy Council, which he said is hard to access with the need to get a visa to go to the UK, and very expensive, especially with the foreign exchange rate.

"The time has come when we should recognise that we need, as a region, to have our own court system, and the CCJ is the way to go," said Erskine.

"We have judges of the calibre who can deal with any matter that comes before them," added Erskine.

He referred to the Shanique Myrie case, which he said showed it was possible for us to access that court and get justice from that court. "As a country, we need to get it together."

Erskine further noted that for a matter to be taken before the Privy Council, a lawyer in Jamaica has to brief a lawyer in England, making the cost very expensive.

The Government and the Opposition have already agreed on the CCJ as Jamaica's final court of appeal but are at odds over the process to achieve this.

Walker said the Bar Association realises that the process will involve the amendment of the Constitution of Jamaica (particularly Section 110) as well as other laws, regulations, rules and codes.

"Also, the Jamaican Government would be best advised to carefully examine the existing workings, mechanics, funding, rules, administration and working of the CCJ to ensure that same will function satisfactorily as our final appellate court," added Walker.

He said the consultation process with all stakeholders and Jamaicans remains crucial, and it is important for the Government to continue dialogue with the Jamaican people and civil-society groups ... as regards the process and timing of moving towards the CCJ becoming Jamaica's final appellate court.