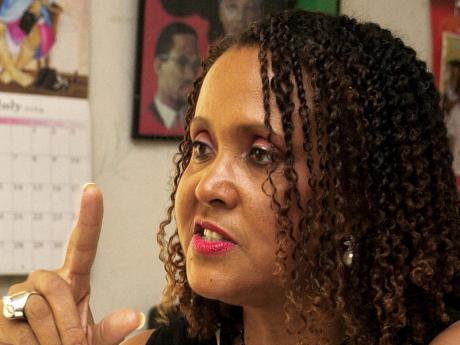 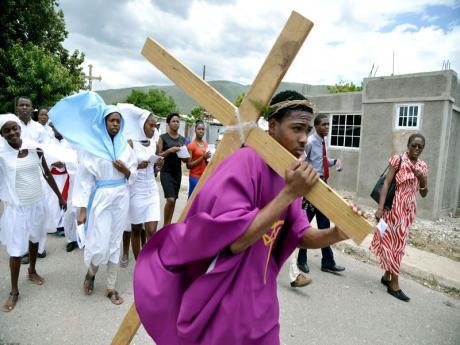 Ashanni Duffus of the Holy Rosary Church in east Kingston portraying Jesus Christ carrying the cross on Good Friday. The church members marched through the nearby communitiy of Bowerbank, as part of an annual ritual.-Norman Grindley/Chief Photographer
1
2

The new reality in Jamaica and around the world?

Christians have been persecuted in one way or another and in different parts of the world since time immemorial, but what is emerging now appears to be the new global reality.

It is subtle and sometimes not so subtle, but it is sure - Christians everywhere are now being targeted for persecution, and the evidence is becoming clearer and clearer.

What used to be considered a theological and philosophical divide between the secular and the sacred is now an outright war between atheism and Christianity and those declaring war on Christians are amassing and deploying heavy arsenal.

Developments in parts of Europe, Canada and the United States appear to be not only models, but catalysts.

In a landmark judgment in the United Kingdom in 2011 involving a Jamaican couple, Owen and Eunice Johns, the High Court essentially determined that homosexual rights trumped religious freedom and freedom of conscience.

Over a period of 19 years, the Johns had distinguished themselves as exemplary foster parents, having successfully fostered 15 children.

In 2007, the Johns applied once again to foster a child, but the City Council blocked their application because they objected that the Johns were not willing to promote the practice of homosexuality to a young child.

In November 2010, both parties jointly asked the court to rule on whether the Johns were able to foster children or whether they would be excluded from doing so under the country's Equality Laws because of their Christian beliefs.

In handing down the ruling against the Johns, the judges stated, inter alia, that if the children are placed with parents who have traditional Christian values like the Johns, "there may well be a conflict with the local authority's duty to safeguard and promote the welfare of looked-after children".

Britain's Equality and Human Rights Commission, which played a critical part in the case, suggested to the court that a child should not, in their own words be, "infected" with Christian moral beliefs. Currently, the Johns are unable to foster children.

Similarly, a Christian couple, Peter and Hazelmary Bull, lost their court battle and were forced to put their guest house up for sale. The Bulls, ever since they established their small bed and breakfast business, held fast to their Christian belief in the sanctity of marriage, and maintained a policy that only married couples were allowed to share the same bedroom. When the couple refused to let a homosexual couple stay in the same bedroom, they were dragged into court. The Bulls lost and were fined.

The landmark ruling in Bristol County Court was described as "effectively sealing the supremacy of homosexual rights over Christian beliefs". Outside court, Mrs Bull remarked that the verdict had serious implications for the religious liberty of Christians, and that they felt pushed to the margins of society. She added, "Some people are more equal than others."

Here at home, the campaign to diminish, if not erase God from Jamaican society, is no less intense, albeit subtle, and in some cases clandestine.

There are rumours abounding that there is a quiet but very deliberate strategy of "Christian Cleansing" taking place in certain key public institutions in the country.

In one case, it is alleged that committed Christians in high-ranking positions were relieved and/or transferred to other departments under various guises. Another report described a very contentious meeting in which a Christian organisation was asked to remove the names of Jesus Christ and Jehovah God from a prayer that was being drafted for the nation.

When asked by a Christian in the room, "Isn't Jesus Christ a part of our culture?" the response from the person in charge was "not any more".

The current case involving a University of the West Indies professor is beginning to raise alarm bells within the Christian community.

The professor, Brendan Bain, a devout Christian and academic with over 30 years of service to the University of the West Indies, is purportedly faced with the possibility of dismissal from his substantive post, allegedly due to his submission as an expert witness in the Supreme Court of Belize, in which he stated his private, professional viewpoint as it relates to HIV and its impact on men who have sex with men (MSM).

Then there is the Government's proposal to introduce flexi-week despite opposition from the Church. Some members of the Christian community are taking note of the fact that every mention of the word 'Sunday' that appeared in the old legislation has been removed, and that Sunday, traditionally enshrined as a day of worship and rest, will become under the new, proposed flexi-week law a matter of "negotiation" between employer and employee.

"War has been declared on Christians," a pastor warned. "All of us are now called to put on the full armour of God, and stand."

Betty Ann Blaine is a Christian, Children's Advocate and Founder of two children's organisations: Hear The Children's Cry and Youth Opportunities Unlimited (YOU).