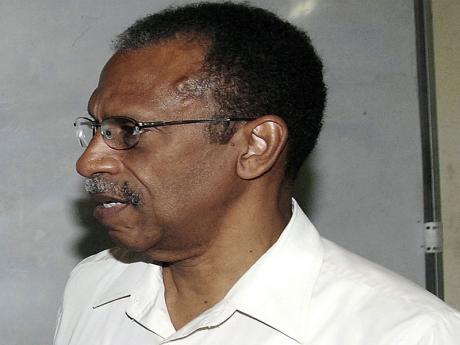 An article published, under the headline ‘A professor’s trial’, incorrectly stated that Professor Brendan Bain appeared before the Supreme Court in Belize. Bain had prepared a report which was submitted to the court. Also, in that report’ Bain did not make a recommendation about keeping that country’s anti-gay law, nor did he comment directly on the Belize economy.

A University of the West Indies (UWI) professor has found himself in a prickly spot after testifying in Belize that gay men are at a higher risk of contracting the HIV virus, and that it was in the best interest of that country to retain its anti-same-sex relationship laws.

Professor Brendan Bain, director of the university's Caribbean HIV/AIDS Regional Training Programme (CHART), told the Belize Supreme Court that countries which have repealed their buggery laws have seen an increase in HIV/AIDS rate among the population of men who have sex with men (MSM).

He argued that a change in the law could have a deleterious effect on Belize's economy.

However, his testimony has not gone done well with some 35 advocacy groups across the region that have demanded that he be sacked from some positions at the UWI.

In a letter to Bain, the UWI's vice-chancellor, E. Nigel Harris, indicated that key stakeholder groups in the fight against HIV have voiced their displeasure with his testimony and continued leadership of CHART, and as such an advisory committee has been convened to look into his suitability to retain his current position.

The move comes after advocacy groups wrote a second letter to Harris demanding that Bain be removed "from any leadership position in the CHART programme and all positions of representation at the university on issues of HIV and AIDS".

In the correspondence to the vice-chancellor and copied to CARICOM's secretary general, Ambassador Irwin LaRoque, on April 24, the groups lamented that the UWI was dragging its feet in removing Bain from directing the CHART programme and other HIV/AIDS-related outreach efforts.

On May 6, Harris informed Bain that a meeting was scheduled for last Monday to consider his "leadership of an institutional body that has a responsibility for the conduct of a regional endeavour affecting diverse members of our communities and funded by funds allocated by a USA-based agency committed to combating HIV/AIDS".

Harris said the groups had also expressed that they had been adversely affected by Bain's testimony "in support of the retention of a law in Belize whose existence continues to discriminate against persons who practise same sex".

The vice-chancellor made it clear that the committee would in no way be examining Bain's freedom as an academic to express certain views and conduct scientific research in his own capacity.

Harris stated that Bain was being given the option to present a written or oral testimony to the committee.

He also said the committee would not be considering the facts of the case before the court, but would only be focusing on whether Bain is suitable to continue being the director of CHART.

It is unclear if last Monday's meeting had taken place as scheduled and efforts to contact Bain were unsuccessful, as he was said to be off the island.

When the vice-chancellor was contacted for a comment, an assistant informed The Sunday Gleaner that the matter was still being discussed and Harris did not wish to speak until it was concluded.

Bain had appeared as an expert witness before the Supreme Court in Belize in the matter of Caleb Orosco and the United Belize Advocacy Movement vs the Attorney General of Belize, supported by various church groups.

Orosco and the United Belize Advocacy Movement are contending that Section 53 of the country's criminal code, which outlaws same-sex relations between consenting adults, is discriminatory and should be struck from the books.

Bain, who is said to be a devout Christian, had presented more than five different studies, which he claimed showed that MSM are at a higher risk of contracting the disease and it will be costly for the country.

A similar challenge has been mounted against Jamaica's anti-sodomy law, in which Bain is reportedly to be called as an expert witness by the Jamaican Coalition for a Healthy Society, which is batting for the retention of the law.