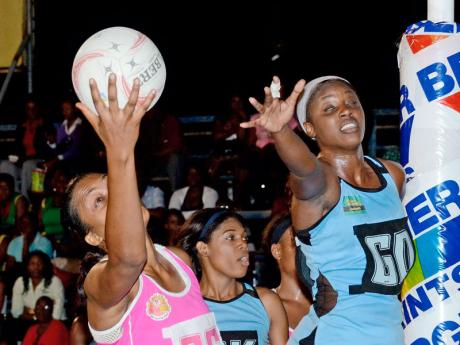 National representative Thristina Harwood turned in a scintillating second-quarter shooting display to guide the Kingston and St Andrew Humming Birds to a comfortable 54-38 victory over St Catherine Racers to level their best-of-three finals in the Netball Jamaica/Berger Paints Elite competition on Friday evening at the Leila Robinson Courts.

Harwood netted 12 of her team's 18 goals in the second period to inspire the Humming Birds to a series-levelling victory in game two.

Regarded as one of the island's most talented young shooters, Harwood ended the match with a game-high 36 goals from 43 attempts. She received support from former national shooter Elaine Davis, who shot 18 goals from 23 tries.

National representatives Sabrina Spence, 28 goals from 39 attempts, and Ann-Kay Griffiths, 10 goals from 14 tries, were the top scorers for Racers.

Rohan Robinson, assistant coach of the Humming Birds, who took of the charge team in the absence of head coach Sylvester Campbell, was very happy with his team's performance.

"I am delighted because the girls gave it their all, because if you notice, it is the same seven players that started the game finished the game and so that was how intense it was for us," said Robinson.

Christopher Smart, coach of the Racers, was very disappointed with his team's efforts.

"We started out well, but as soon as the pressure was on us, we weren't able to control ourselves, and so we just lost our momentum," Smart said.

The Racers began the match very confidently as they raced to a 11-6 lead at the end of the first quarter over their opponents.

However, the Humming Birds came out firing on all cylinders in the second stanza, with Harwood scoring six straight goals to give her team a 12-11 lead midway the quarter.

The Humming Birds also defended stoutly in the second period, with national player Stacian Facey and Kimesha Sterling shutting down the Racers while intercepting a number of passes. The Humming Birds went on to outscore the Racers 18-6 for a 24-17 lead at half time.

Harwood thrilled the crowd with her smooth long shots in the third quarter, as the Humming Birds outplayed Racers at both ends of the court to take a 34-28 lead at the end of the period.

The Humming Birds proved unstoppable in the final quarter as they locked down Racers' attackers, while forcing them to commit 14 turnovers, on their way to a comfortable victory.