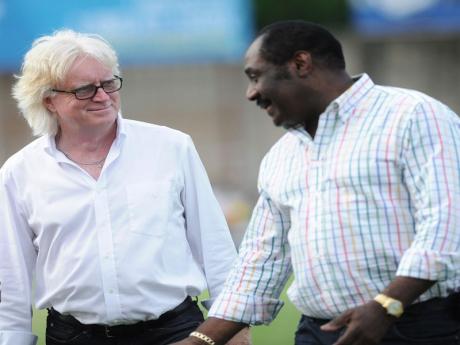 ON THE BOUNDARY Tony Becca

In another few years, Jamaicans may remember 2014 as the watershed year for local football.

The reason is that 2014 may well be remembered as the year that Jamaica got serious about the 'beautiful game' and going back to the World Cup finals.

On Sunday, May 4, the Jamaica Football Federation (JFF), headed by the indefatigable Horace Burrell, decided that it will change course and get rid of the hit-or-miss efforts of properly developing the country's footballers.

Maybe Burrell and company have given up on travelling the world in a desperate attempt to find a player who qualifies as a Reggae Boy, or a set of players who are seeking an easy route to the World Cup finals.

Whatever it is, probably, at least for now, it seems that the bosses of Jamaica's football have given up on the principle of 'the more the merrier', and on the idea of spending so much money in tracking down and bringing to Jamaica players who are no better than visitors to the country and players looking for an easy way to the finals - not to mention players who are almost strangers to the game.

At present, football in Jamaica is popular. Almost everyone plays it. It is played in every open lot, but still the standard remains poor.

In a brave and monumental move, however, the JFF recently announced that as of the season of 2015-16, it will be moving to a sort of professional situation in which, among other things, the league will be contested by 10 franchise-based clubs.

This is a move that will be cheered by the late Leighton Duncan and Foggy Burrowes, wherever they are, and it will be something for which many Jamaicans will be happy.

They have been hoping for this for years and years now.

Nothing ever happens before its time, however, and the dreams of Jamaican sportsmen today, the attitude towards sports and achievement of Jamaican businesses, and the general euphoria of Jamaicans whenever Jamaicans win suggests that this is as good a time as ever.

The proposal includes not only 10 teams, down from 12, but 10 franchise teams, a second-tier competition which will include the parish champions, and restructuring of the JFF for more effectiveness and transparency.

Franchise teams, in the long run, should mean more money in football, money from investors. It means football being run as a business, people getting paid to run and play football. It means the better one becomes, the better he will be paid, and it also means he will have to be disciplined to listen to those in charge, to train, and to practise harder almost every day for most of the day.

The development of football means the best talent playing together competitively against each other regularly, and in good conditions, under good managers, good trainers, good coaches, and good technicians, and under the watchful eyes of good officials.

The franchise system, however, cannot operate in a vacuum. It will need another league to supply it with talent, and the JFF has planned for that with a secondary league involving the parish champions.

In an effort to keep football popular, to get more people playing the game, the JFF plans to place more emphasis on the club structure.

The franchise system is definitely the way to go, and it will be the best way to go, providing the players, many of them, change their attitude, particularly towards management, and follow instructions, both as it affects their play and their attitude, on and off the field.

The players and the JFF must realise that for a franchise system to work, it needs investors, and that investors need good players with presence, the sort of presence that will do justice to their businesses.

They would also love to see Jamaica become masters of the 'beautiful game', rub shoulders with the best from anywhere, with Messi, Ronaldo, and company, and most of all, make it back to the World Cup finals - not once, but many, many times.

And if the franchise system works in Jamaica, who to tell, one day, years from now, little Jamaica may end up winning the World Cup.

Football would then join cricket, track and field, and boxing on Jamaica's long, unfinished list of world beaters.

A few voices have been raised in opposition to this idea, but it seems to be because of a fear that clubs will die and also because of a loss of influence, of voting power in the game.

Apart from the fact that clubs will not die, the opposition seems to be about the possibility of fewer teams being involved, a fear that the reduction in the number of teams will affect some confederations, that the restructuring of the game will affect the number of votes they now have, and that that will also affect their influence on the game.

Some things must change, however, and all that is secondary to the development of the game, to the standard of Jamaica's football, and all Jamaica hope that it will be a peaceful and successful change.

If Jamaica's football is to improve, the best footballers in the country must play together regularly and as often as possible, under good guidance, and in good conditions.