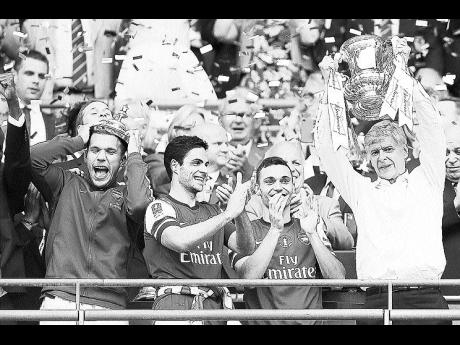 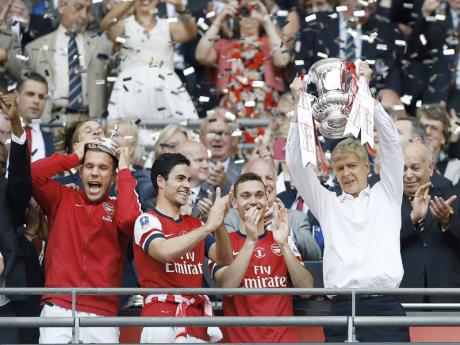 LONDON (AP):Doused in champagne by Arsenal's victorious players, Arsene Wenger was soaked in success once again.

The nine-year wait for a trophy finally ended yesterday and the manager, who had felt the pressure and faced derision over the drought, could finally celebrate on the Wembley Stadium pitch.

"It's a big, big moment of happiness," Wenger said. "We waited a long time for that. But the happiness is linked sometimes with the time you have to wait for it. That's why it was a great moment at the end of the game."

Arsenal looked headed for disaster early on when their defence imploded to concede two goals in the opening eight minutes, as James Chester and Curtis Davies scored for a Hull side that has never won a major trophy in its 110-year history.

Santi Cazorla began Arsenal's fightback in the 17th minute by scoring directly from a free kick, but Laurent Koscielny took until the 71st to equalise and force the game into extra time, when Ramsey completed a slick move to score.

"This one's for the manager, for the fans, who've always believed in us as well even when things weren't going as well," Ramsey said.

This is a team that has played in the Champions League for 16 successive years by finishing in the Premier League's top four, but has failed to match its talent with silverware since lifting the 2005 FA Cup.

"I think it was a turning point in the lifetime of this team," Wenger said. "And to know they can win in that way was very important today."

But three years after conceding a late goal here to Birmingham in the League Cup final, this looked like being another miserable day for the Gunners.

Arsenal's defence was non-existent, breached far too easily inside three minutes by a team that only just avoided relegation in its first season back in the Premier League.

Tom Huddlestone met Stephen Quinn's free kick on the edge of the penalty area with a volley that was heading off target until Chester flicked the ball with his heel into the bottom corner of the net.

Before Arsenal's players could recover, Lukasz Fabianski was picking the ball out of his net again. A header from Alex Bruce, whose father Steve manages the team, hit the post and Davies fired in the loose ball from a tight angle.

But Cazorla gave Arsenal a much-needed spark with a piece of individual skill as the Spaniard curled in a free kick from distance into the top of the net. The search for the equaliser, though, proved frustrating with Giroud ineffective up front.

But as Hull tired after the break, Arsenal seized control of the game during the second half. They were rightly aggrieved not to be awarded a penalty by referee Lee Probert when Cazorla was brought down by Davies in the area.

But after Probert incorrectly gave a corner rather than a Hull goal kick, Arsenal levelled from Cazorla's set piece. Sagna's header came off Chester and dropped for Koscielny to turn the ball into the net in the 71st.

Dominating an ineffective, quickly fading Hull side, the cup could have been won in the 79th but for Arsenal's wayward finishing. Striker Yaya Sanogo, who had replaced Lukas Podolski, withheld challenges on the right flank before squaring to Kieran Gibbs. The left back was unmarked and had time to control the ball, but managed to lift it over the crossbar from six yards out.

Giroud found the target in the 82nd with a powerful strike only to be thwarted by goalkeeper Allan McGregor's fine save. In extra time, it was the crossbar denying Arsenal inside five minutes after Giroud met Aaron Ramsey's cross with a header.

But a flowing move in the 109th ended with Giroud's backheel reaching Ramsey, who slotted the winner low into the net. The title drought is over and Arsenal has a trophy to take back to the Emirates Stadium for the first time since moving there from Highbury in 2006.