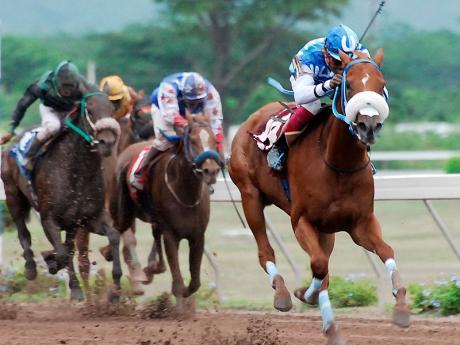 The lightly weighted FANTABULOUS scored a 14-1 upset in yesterday's overnight allowance feature over 1500 metres at Caymanas Park to complete a double for in-form trainer Ryan Darby and owner O'Shaun Connection on the 11-race programme.

Ridden by 3.0kg claiming apprentice Kuri Powell in a field of 14, FANTABULOUS, who raced prominently in third on the outside leaving the half mile, took over the lead from hat-trick seeker FORTUNE-ONEHUNDRED (10-1) with female jockey Georgina Sergeon on entering the straight and slipped away approaching the distance to win by 41/2 lengths under the postage stamp impost of 48.0kg.

The 9-5 favourite MIRACLE STAR, who was unable to go the early pace set by FORTUNEONEHUNDRED and LADYLIKE, stayed on well leaving the furlong pole to finish a clear second, with FORTUNEONEHUNDRED fading into third.

There was a stewards' inquiry into the running of the race and this led to the disqualification of fourth past the post HOLOGRAM SAHADOW (9-1) for causing interference at the halfway stage.

A 4-y-o bay filly by War Marshall out of Lady Indira, FANTABULOUS was notching her second consecutive win, having beaten the highly fancied 3-y-o colt FRANFIELD by a head over 1820 metres on April 30.

Darby and O'Shaun Connection also teamed up to win the first race over 1300 metres with even-money favourite PRINCESS SHANEIL, who made virtually all with Paul 'Country' Francis aboard. The owner/trainer combination also had a second place finish with 4-5 favourite PRINCE O'SHAUN in the seventh race over the straight, an event won by 11-1 outsider CLEARLY OURS.

Darby, son of veteran trainer Robert Darby, has now saddled 17 winners this season to hold down fourth position in the standings with over $6.7 million in stakes.

On what turned out to be miserable day for form players, PRINCESS SHANEIL and the Norman Palmer-trained DONATA at 3-5 in the ninth race were the only winning favourites.

Hottest favourite to bite the dust was the previously unbeaten LADY SHANKARI, who finished a flounderIng last of six in the fifth race over 1000 metres round for native bred three-year-old fillies.

Installed a howling 1-5 favourite, the Howard Jaghai-trained filly, who was having her first race since winning on debut last December, walked out of the starting gate with Francis aboard and was hopelessly tailed off throughout.