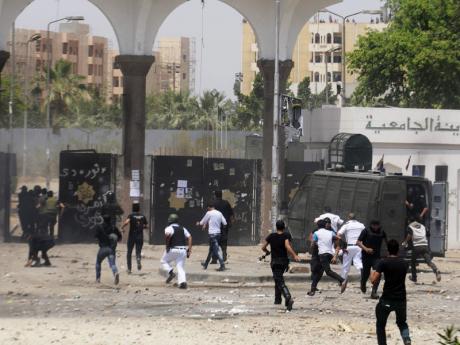 Egyptian security forces run into a student housing area of Al-Azhar University during clashes with student protesters in Cairo, Egypt, on the weekend. Supporters of Egypt's Islamist President Mohammed Morsi continue to protest in the streets as retired Field Marshal Abdel-Fattah el-Sissi, who led last year's overthrow of Morsi, appears poised to win in the presidential election planned this month.

A pair of Egyptian courts yesterday convicted 170 suspected supporters of toppled President Mohammed Morsi on charges over violent attacks last year, in the country's latest mass trials ahead of this month's presidential elections.

The convictions in the courts in Cairo and in the Nile Delta city of Kafr el-Sheikh are the latest in a series over recent months that saw hundreds of people prosecutors identified as Morsi supporters sentenced to death or imprisonment.

In some cases, the verdicts came after no more than two hearings, drawing criticism from human-rights activists and foreign governments as Egypt's military-backed interim government continues its crackdown on Morsi supporters and his Muslim Brotherhood group.

The Kafr el-Sheikh court convicted 127 people of storming and torching a church, a police station and a sports stadium to avenge the killing of hundreds of Islamists when security forces ended two sit-in protests in Cairo by Morsi supporters in August, according to a statement by the office of Egypt's top prosecutor. They were sentenced to 10 years in prison each. Five minors, all 17 years old, each received a one-year suspended sentence in the same case, the statement said.

The second court in Cairo sentenced 37 people to 15 years in prison each for their part in an attempt to blow up a subway station in Cairo last year, in addition to charges of vandalism, illegal possession of explosives, arms and ammunition along with disrupting public and private transport, said the statement from the chief prosecutor's office.

A 16-year-old received a three-year prison sentence in the same case. The court also fined all the defendants 20,000 Egyptian pounds ($2,800) each.