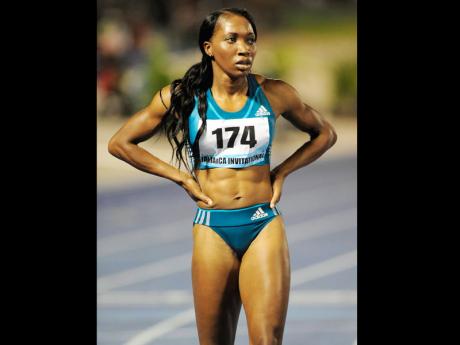 Veteran quarter-miler Novlene Williams-Mills was the only Jamaican winner at the Shanghai Diamond League meeting in China yesterday, at which there were five world-leading performances.

Several other Jamaicans performed well at the second Diamond League event of the season where triple world champion Shelly-Ann Fraser-Pryce was a late withdrawal in the women's 200 metres and Veronica Campbell-Brown fizzled.

The 32-year-old Williams-Mills, a cancer survivor, was in a stacked field that included World Indoor Champion Francena McCorory and Alyson Felix; after getting off to a fast start, she managed to walk down 2013 World Championship silver medallist, Botswana's Amantle Montsho, in the home stretch to win in 50.31s. Montsho (50.37) managed to hold off Jamaica's Stephanie Ann McPherson, who was third in 50.54s. Kaliese Spencer finished seventh, but clocked a season-best 51.00.

On May 11 in Tokyo, American Justin Gatlin indicated that he was ready to break the 10-second barrier this season when he blasted to a 10.02s-win, running into a negative wind of minus 3.5m/s. In more favourable conditions in Shanghai, he duly delivered, easily winning the men's sprint in a world-leading 9.92s ahead of Nesta Carter 10.12s and Mike Rodgers 10.18s.

The expected showdown between Nigeria's Blessing Okagbare and Jamaica's Fraser-Pryce over 200 metres failed to materialise as the latter pulled out late after aggravating a leg injury she has been nursing this season. Her absence cleared the way for the powerful Nigerian to set a world-leading 22.36s, well ahead of Bahamian Anthonique Strachan, 20.50, and Kimberlyn Duncan, 22.96. Two-time Olympic champion Campbell-Brown, who has not raced much in the last year because of a provisional drug suspension, of which she was subsequently cleared, was a disappointing fifth in 23.03s. She finished ahead of countrywoman Anneisha McLaughlin, who was sixth in 23.33s.

Okagbare did the double on the day, winning the long jump with a leap of 6.86 metres.

Action in the field was even more impressive as Croatia's Sandra Perkovic delivered a strong series of throws to win with a season-best and world-leading 70.52 metres. Australia's Dani Samuels was second with 67.89m, while Frenchwoman Melina Robert-Michon's best of 62.66m was good enough for third.

Odayne Richards did not deliver another 21-metre throw that saw him finish second to Christian Cantwell in Jamaica on May 3. His best yesterday was 19.78m, which was only good enough for ninth. Americans swept the top-three spots with Cantwell out-muscling his rivals with a hurl of 21.78m, besting Joe Kovacs, 21.51, and Ryan Whiting, 21.31.

From a hometown perspective, Xie Wenjun's win in the sprint hurdles was the greatest performance of the meet. Up against Cuban Dayron Robles; World Champion David Oliver; and Frenchman, indoor 60m silver medallist Pascal Martinot-Lagarde, Xie Wenjun ran a personal best of 13.23s that had the stadium buzzing.