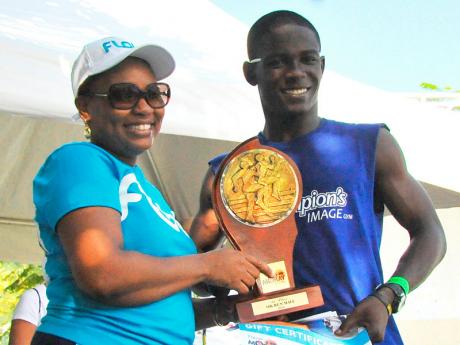 Western Bureau:The Flow MoBay City Run, a 10K, 5K and 5K Walk series of road races, had a successful inaugural staging yesterday, with well over 1,600 participants turning out for the charity event.

The run saw participants taking over the streets of the second city to raise five million dollars to fund scholarships for students at the tertiary institution.

Sharnon Williams won the men's 10K race in a time of 39.01 seconds. Kenroy Jonson took the second-place medal and third went to Leroy Daley. On the women's side, first place went to Karlene Blagrove, who crossed the finish line in 42.48 seconds. Julie Maille took second place and Rainforest Seafood's Alison Sutherland in third.

Horace Bury from Linstead, St Catherine won the 5K race, taking the top spot in a time of 20.29 seconds. Second went to Jordane Black of Vista Print, while RIU Hotel's Mario Harrison took bronze. After the race, Burley told The Gleaner that the race was more than what he expected.

The women's 5K race was won by Jill Stewart; second place went to Christina Samuda of the Body Shop, while Ciska Haynes copped the bronze for finishing third.

Awards were handed to the top five of the walk race category.

Fourth place went to Opal Wisdom who came in 25th and fifth went to Dianna Fields who came in 33rd.

MoBay City Run Chairperson Janet Silvera was in a jubilant mood, describing the first-ever City Run as an awesome experience while promising a bigger better event next year.

"This was just awesome. I am heartened by the tremendous support," she said.

"All the companies from across western Jamaica came out in huge numbers, making the turnout a wonderful spectacle, and without these companies we could not have had this event, so I am very pleased," said Silvera.

She said while there were glitches, those were expected as it was a first time held event, but promises a much smoother return next year.

"We are very pleased with the execution of the day's event and while there were a few glitches, we are still delighted that we accomplished in fine style what we had to. Next year will be better," declared Silvera.

The RIU Hotel group with its 262 participants was given an award for the largest corporate group, with Scotiabank taking second place with its 150-strong group.

"It was a fabulous initiative and Flow decided to come on board because the aim is to raise five million dollars for tertiary education fund, and we believe strongly in education and is a strong partner in the city of Montego Bay."

The telecommunication firm donated over $2.5 million in cash and services towards the event and provided free Wifi for patrons to the event.