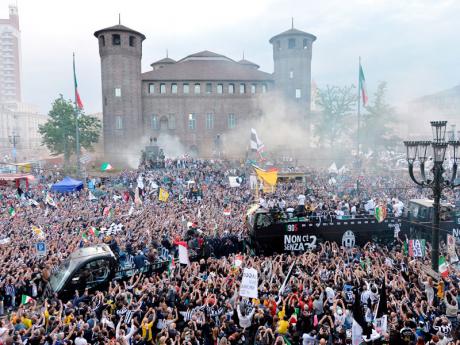 Juventus' players stand on a bus parading in downtown Turin, Italy, as they celebrate their third straight Serie 'A' title. 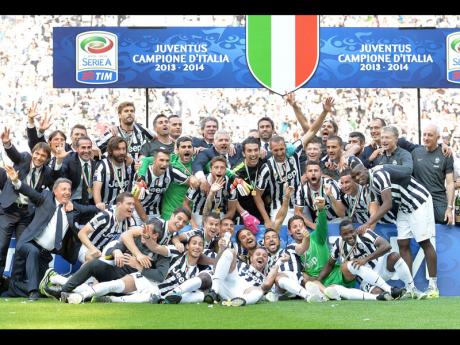 Juventus' players and staff celebrate at the end of their Serie 'A' match against Cagliari at the Juventus Stadium in Turin, Italy, yesterday. Juventus celebrated their third straight Serie 'A' title with a 3-0 home victory to set a new European record of 102 points. - AP Photos
1
2

Juventus celebrated their third straight Serie 'A' title with a 3-0 home victory over Cagliari yesterday to reach 102 points for the season, a record in the major European leagues.

Antonio Conte's side had already broken the Serie 'A' points record, but ensured they moved into triple figures by also becoming the first Italian side to win all its home games.

"It is an incredible and historic feat, which we have achieved all together," Conte said. "What the players, staff and club have done is something incredible. They have been extraordinarily special, and I will never stop thanking them.

"Sometimes you forget that victory is an exception, not normality. These lads have achieved something unique together. It will be difficult to repeat the 102 points. All future comparisons will be made with this squad."

Juventus players posed for a team photo with their children before kick-off, while the trophy presentation and an open-top bus parade took place after the match. Juventus clinched the title two weeks ago.

Pirlo fired Juventus into the lead in the ninth minute with one of his trademark free kicks, although it was awarded as an own goal by Marco Silvestri as it hit the crossbar before going in off the goalkeeper's back.

Juventus doubled their lead six minutes later when the defence failed to clear after Leonardo Bonucci flicked on Pirlo's corner and Llorente tapped in for his 18th goal of the season.

Marchisio scored a spectacular third, controlling the ball with his back to goal before flicking it up and firing it home with a swivelling volley.

At the start of the second half, a huge banner was unveiled bearing Conte's face and the words "Without you we won't go far ... because you are the best and have Juve in your heart".

Conte, who has yet to commit his future to the club, was given a standing ovation when he emerged for the trophy presentation, moving his wife to tears.