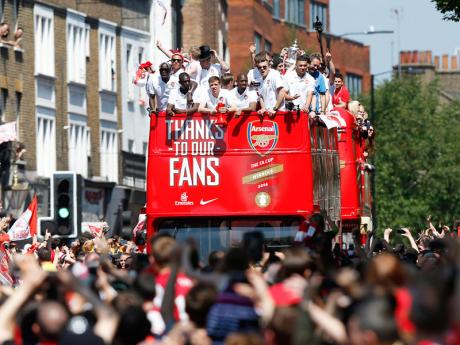 Arsenal players parade through the streets of London yesterday on an open-top bus in celebration of their English FA Cup win. - AP

For the tens of thousands Arsenal fans lining the streets of north London yesterday, it had been a long time coming.

After nine years spent desperately waiting for a title, they finally got the chance to celebrate the end of the drought as the Gunners paraded the FA Cup on an open-top bus following their comeback victory at Wembley.

The team set off from the Emirates Stadium under sunny skies, and made its way toward Islington Town Hall, stopping regularly to thank the chanting fans packed on both sides of the route, before returning to the club's home ground.

"It's been nine years now, we've waited a long time for this," Arsenal midfielder Jack Wilshere said. "We've worked hard, and the manager has worked hard, but most of all, this is for the fans who fill the stadium every week. This one is for them."

Arsenal recovered from 2-0 down, with goals from Santi Cazorla, Laurent Koscielny and Aaron Ramsey securing a fifth FA Cup trophy in Arsené Wenger's 18-year reign. The Frenchman's contract is due to expire at the end of the season, but he has expressed his desire to see it renewed.

"We would like to thank our fans really deeply, we realise how much they love our club, and we are grateful for that," Wenger said. "Our players are great, but our fans are even better; they show it again today."

Wenger waved to the crowd along the route, and brandished the FA Cup trophy outside Islington Town Hall before Thomas Vermaelen lifted it in front of the roaring fans at the Emirates.

"We had to fight very hard, but this group of players have shown great mental strength through the whole season," Wenger added in a tribute to his players. "They've gone through some difficult times, and they've always recovered, responded; and I think the club can be very proud about what they've achieved this season."

Arsenal chief executive Ivan Gazidis insisted the club should not rest on its laurels after winning the cup, and is hopeful the victory will mark the beginning of a successful era.

"We have a good platform to build on. Today's a great day for us to celebrate, and we should do that as the Arsenal family," he told the club website. "But tomorrow we start work again, and we've got to use this to progress the club, to take it forward. This was a very big step, to have the players understand what it takes to come through that kind of adversity, to get over the line whatever it took is a big step, and now we need to take the next step."