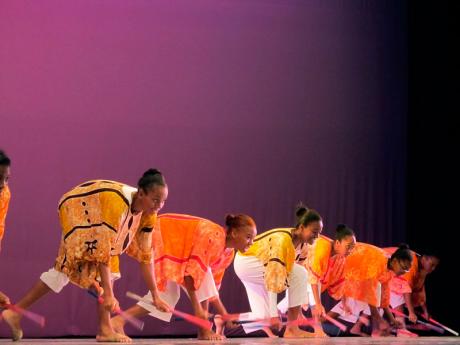 Dancers perform 'Hallelujah' during Praise Academy's presentation of 'Crossing Jordan' at The Little Theatre on Saturday. -Photo by Marcia Rowe

Praise Academy's 'Crossing Jordan' brought with it an expectation of diversity, especially with 10 choreographers at its disposal. To an extent, each delivered.

The choreographers' styles were not the only offering variety on the dance programme as the fair-sized audience at the Little Theatre was also treated to a video presentation, the spoken word and live performances from a vocalist.

The choreographers opted for a blend of traditional folk, jazz and contemporary movements, done to impressive music. Each dance was complemented by appropriately designed costumes, in predominantly earth tones, along with blue and white. Additionally, props and set complemented the creative display.

But it was the pool of talented dancers that brought all the elements to life, resulting in moments of praise from the audience.

The evening of dance ministry commenced with a difference. Curtains opened to reveal vocalist Sharon Anderson-Roach, whose performance reflected the sub-themes of preparation and concentration.

Anderson-Roach invited the audience to close their eyes and imagine stepping out of Egypt, but not before dancers, called Dunamis, made entrances through the crowd.

The five-segment opening choreography, 'Come into the Land', was the creation of Marcia Bailey and Nicole Bain. Wearing white and earth tones, the energetic dancers explored the performance space well.

The spoken word, delivered by Trudy-Ann Brown, provided a nice segue for the Patrick Earle-choreographed 'Cry of the Heart'.

Creatively conceptualised and justly performed by Trisha Lindsay, the dance began with a dancer lying on her back (centre stage), her head towards the audience, while the uplifting words of Smokie Norful soared through the theatre.

As the dance progressed, long strips of fabric were brought on to intensify the mood of the dance. The power of the music, as well as the message were not lost on the audience, which responded with shouts of praise when the dance concluded.

Choreographer, Sophia McKain, opted to use a few Kumina steps in 'Faith'.

Lindsay and Roberta Daley opted for ring games in 'Great God'. Section one concluded with a summary of all the dance movements in a colourfully costumed and presented work called 'Moving Forward'.

With the stage transformed into fantasy land, boasting palm trees placed upstage, the little ones, called Kingdom Kids, made their first appearance on the programme, much to the delight of their relatives.

Cutely dressed, they ran around the stage, guided by two adult dancers. Shortly after, they sat down in two groups, while the adults animatedly told a story.

But it was the slips and misses from the little ones that brought welcoming humour to the show.

The children would reappear to close the piece. The audience's response was the same.

Segment two could be dubbed the variety section, as it continued with Omoro Griffiths' and Chrisando Christie's choreography of 'The Stones'.

Before doing so, the dancers entered with symbolic stones and placed them upstage. Once the weight of "sin" was out of their hands, they moved with ease across the stage, symbolically showing what it means to cast away one's sins.

The dance ministry also included in its package, the spoken word from Neva Campbell and a soloist who danced to the message being displayed on a video.

Other dances, such as Kenesha Delatebudair's 'I Need You' and a very creative 'Surrender' from Daley, contributed to a rather fulfilling show.

The programme ended with another Daley choreography, the lively 'Hallelujah', performed by the entire cast. Saturday's show was the first of two. The other was held on Sunday at the same venue.