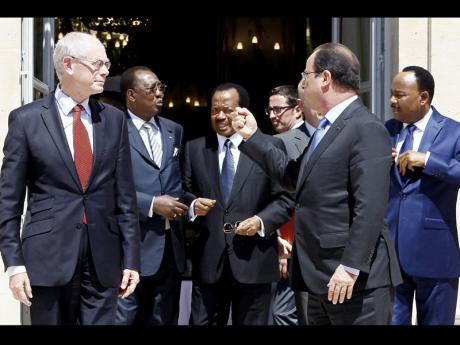 Traditional hunters armed with homemade guns, poisoned spears, and amulets have gathered in their hundreds, eager to use their skills and what they believe to be supernatural powers to help find nearly 300 schoolgirls abducted by Islamic extremists.

Some 500 hunters, some as young as 18 and some in their 80s, say they have been specially selected by their peers for their spiritual hunting skills and have been waiting for two weeks in Maiduguri, the Borno state capital and the birthplace of Boko Haram, to get backing from the military and get moving.

With Nigeria's military accused by many citizens of not doing enough to rescue the girls, the hunters demonstrated their skills to an Associated Press reporter on Sunday. With cow horn trumpets echoing eerie war cries, screaming and chanting men twirled knives and swords with dexterity, occasionally stabbing and cutting themselves with no apparent harm. The hunters claimed their magic charms prevented any blood being drawn. They also trust amulets of herbs and other substances wrapped in leather pouches as well as cowrie shells, animal teeth, and leather bracelets to protect them from bullets.