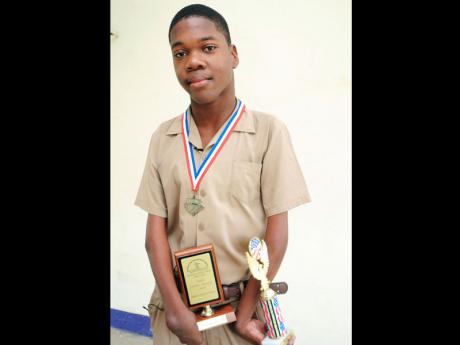 Johnathan Francis, who has a physical disability, has not allowed it to prevent him from an active school life and scoring the highest average at Robert Lightbourne High. 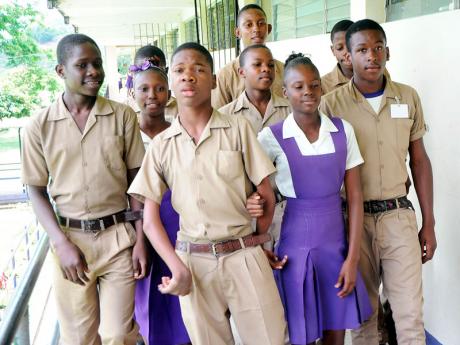 Johnathan Francis (at front) with members of his class at school. - PHOTOS BY Jermaine Barnaby/Photographer
1
2

The teenage years can be a minefield, with the pressures of trying to navigate school, peer pressure, figuring out what career path to choose, cultivating friendships and developing good self-esteem.

Then imagine one teenager going through all this and being faced with a physical disability that significantly hampers his movement.

This would be enough for many to break down and find excuses. But not so for 15-year-old Johnathan Francis, who was born with both arms and feet twisted inwards.

His feet were corrected as a child, but his arms are still disabled.

But Johnathan has never allowed his orthopaedic impairment to damper his spirit or his ability to dream.

When The Gleaner first met Johnathan, back in 2012, he was only a pint-size boy ready to take on the trials of high school.

At the time, Johnathan was determined to make something of himself despite his challenges and, so far, he has stuck to his plan to be the best.

Now a third-form student at the Robert Lightbourne High School in St Thomas, not only is Johnathan one of the most disciplined and well-liked pupils, he is also the top-performing student at the school.

Consistently averaging above 80 per cent in his subjects, Johnathan serves as an inspiration to not only the students and teachers at his school, but his entire community of Mount Lebanus.

However, Johnathan does not view his accomplishments as anything major because he is simply doing what comes naturally to him.

"I am not different in a bad way. I can do many things that they can," Johnathan told The Gleaner recently, adding that he does not like to be treated differently.

The mathematics whiz, who has received many accolades for his prowess in the subject, said he was not perturbed by his disabilities and views them as a blessing.

"I know what I can do. So I am not concerned about what others say," he said confidently.

Johnathan, an avid football and cricket fan who does not shy away from tackling his friends every now and then on the playing field, has hopes of becoming an accountant someday in a bank because, according to him, he understands his limitations and temperament and a job like that would suit him just fine.

His father, Calbert Francis, does not doubt for a minute that Johnathan will achieve his dreams.

"As a struggling dad, I know for each and everyone of us happiness comes in many different ways and you have to travel the rocky road sometimes. But people have told me and that he is the one that's going to make me proud, and I don't doubt that," Francis said.

'I DON'T WANT TO CHANGE IT'

He explained that doctors have indicated that Johnathan's hands could be straightened, but Johnathan has made the decision to not undergo this surgery, which risks them being rendered useless after the operation.

"I don't want to change it and then I can't use it," Johnathan said, pointing to the fact that the impairment does not prevent him from writing in class or during exams.

He explained that with the help of his family and teachers over the years, he has managed to develop strategies that enable him to use his arms in various situations, including completing his favourite chore - sweeping the yard.

His principal, Alfred Thomas, said he is often in awe of the way Johnathan navigates his way during school hours.

In the end, Johnathan said he just wants to be viewed as a normal teenager.