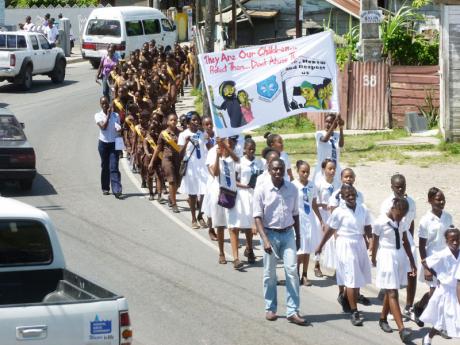 According to the march's organisers, the Child Development Agency (CDA), a recent study by the Office of the Children's Registry found that less than 20 per cent of reported abuse allegations were made by young people.

The CDA's team leader for Portland and St Mary, Dotlyn Bailey, believes the figure is low because many young victims are afraid to speak out.

She hopes the protest, which was held on National Children's Day, will encourage more children to report incidents of abuse to the relevant authorities.

Bailey told The Gleaner: "Today, we had a march of uniformed groups, including primary schools, police officers, and firemen. The aim is to empower children because they do not know the process and may be afraid to approach those who are responsible.

"We decided this was a good way to engage with and hear from the children and to help them develop confidence so they are able to report incidents.

She added: "We think more children are being abused, but because they are not empowered, they continue to suffer, and this affects them in school and later on in life.

"We want to ensure they know there is an avenue where they can say what they want and feel they will get the kind of redress they need."