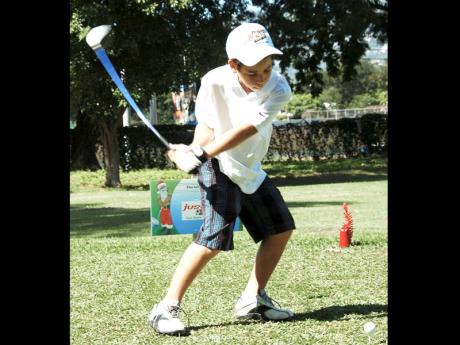 Justin Burrowes is a very determined, disciplined and well-coordinated 13-year-old who could play any sport.

However, his sport of choice is golf, and not the traditional football or track and field that Jamaica reveres.

"I started when I was six. I was taken on a golf course by a friend, I tried out a shot and really loved it," Burrowes said.

From that stage, his coach, Justin Lopez, recognised the youngster's potential.

"I have known Justin from the first day he took a golf club in his hand till now; from age six that kid showed he was definitely marked for great things," Lopez said.

Many would not know, but the junior has already represented Jamaica in six international tournaments, and two at Hillel High and Hopefield Prep, where he dominated.

"For his age, he's the best I've seen in Jamaica," observed Lopez. "When we travel in the Caribbean and North America, he wows spectators, coaches and fans alike."

Burrowes was modest in response.

"I'm just proud to represent my country and play well, I intend to give 100 per cent every time," he said.

To enhance his natural abilities, Lopez says Burrowes turns up seven days of the week to train and play golf.

That passion and commitment paid off when he outclassed the rest of the field in the Caribbean Junior Golf Championship in April. But what's next for the talented golfer.

"We are putting Justin up against the men and women playing in Jamaica's upcoming national amateur event. Our focus is on making him and other juniors dominant players in the region," said Lopez.

Burrowes said he welcomes every opportunity to represent his country.

"I've won several junior tournaments locally and one overseas. Next up, I want to become Jamaica's top golfer and be very competitive when I play abroad."

He added that he is ready for the challenges.

"My short-term goal is to become a zero handicap golfer by the end of the year. In the next five years, my goal is to win an international junior world tournament and become a professional."

That said, his immediate focus is on the national amateur senior championship that begins on Friday (Labour Day) and runs through to Sunday.

"I would like to win it as a junior, then the Caribbean Junior Championships this summer in Puerto Rico," he stated.

Burrowes indicated that he's had his setbacks in the sport, which are due to a lack of a variety of golf courses in Kingston that make it difficult to gain experience in competition.

"Justin just needs exposure like the track athletes get when they train with global stars. Once he gets practice with the best of his age group, the sky's the limit," said Lopez. "We want to get him playing in North America where he can earn scholarships to top golf colleges, then transition into pro golf. But for certain, he will represent Jamaica in future events."

"He definitely has the potential to become an international golfer, but he has a lot of work to do and he has to show drive," said Dhiman. "It all comes down to the work he puts in."