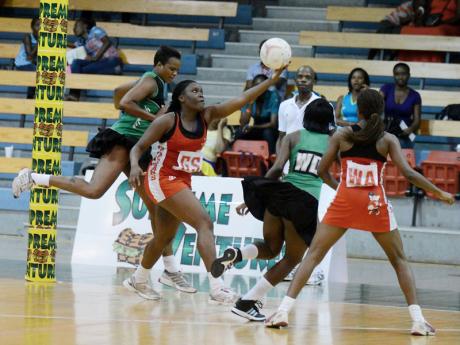 The Powerfully built Lamonth netted 29 goals, from 44 attempts to lead her team to a comfortable 48-38 victory over Jamalco in the final at the National Indoor Sports Centre on Saturday. Lamonth received good support from Shaquina Francis, who netted 19 goals, from 28 attempts.

Conrad Parks, coach of the Pelicans, was happy with his team's victory.

"I am very delighted because my girls played well during this final and they also stuck to our game plan."

"We know that they are a good team and so we started out strong and we played excellently in attack and in defence," said Parks, while giving praise to his assistant and former national coach, Oberon Pitterson-Nattie.

"I must thank Oberon because, during my absence, she came in and worked with team, and the girls really look up to her for her expertise," he added.

Pelicans dominated the game from the opening whistle and held a 25-19 lead at half-time. Their defensive unit locked down Jamalco's attackers in the third period, limiting them to just seven goals, while they extended their lead to 38-28 at the end of the quarter.

Sasha Mitchell shot a perfect 28 goals in a losing effort for Jamalco, while Marsha Murphy-Dawkins, 10 goals from 12 attempts, was the other scorer for Winston Nevers-coached Jamalco.

Jamalco's manager, Wayne Shaw, said his team will benefit from the experience.

"I think we played well because this is a very young team, and a lot of people didn't expect us to reach this far in the competition," said Shaw.

"It was a good performance, but we just made a number of crucial turnovers in the second quarter, and that cost us the game," Shaw

"I think that this experience is good for us because it is the first time that most of these players are playing in a final, and so we will be back next year," he said.