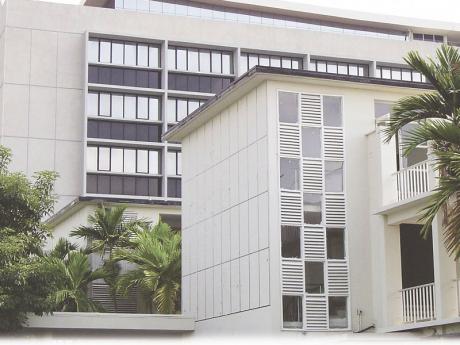 Ministry of Finance and Planning. - File

A year ago, Jamaica was shooting for a debt ratio of 100 per cent midway through its reform programme, but now the Ministry of Finance has amended its forecast to a less ambitious medium-term target of 114.5 per cent relative to GDP.

That's the new target now set for fiscal yearend March 2017. The 100 per cent target was initially forecast, and legislated, to happen by fiscal yearend 2016.

Treasury bill auctions aside, Jamaica has been virtually absent from the capital markets for more than a year, but plans to return with two issues later this month - a fixed-rate bond to mature in 2016 and a variable-rate bond due in 2017 to open for subscription on May 28.

In total, Jamaica aims to raise $56.3 billion from domestic investors this fiscal year, and the equivalent of $53.4 externally from the international capital market and other funding sources.

The finance ministry will tap the PetroCaribe Development Fund for just under half of its internal borrowing - US$250 million ($24.2 billion) - while the rest will be raised from new bond issues and reopened bonds.

In its initial report on its request for an arrangement under the Extended Fund Facility from the International Monetary Fund (IMF) last year, the Jamaica Government said that recognising that fiscal and debt unsustainability have been the main sources of external and macroeconomic vulnerability, its medium-term strategy aims at virtually eliminating the fiscal deficit and substantially reducing the debt burden.

As legislated under the Fiscal Responsibility Framework, it said, "the Government is committed to the achievement of a debt-GDP ratio of no more than 100 per cent by FY 2015-16."

However, it noted then, that despite actions being taken in pursuit of that objective, projections under the programme suggested that the target would not be achieved.

"This refers to debt excluding domestic public-sector guarantees and PetroCaribe debt. Including projections for these two elements, debt would be about 15 percentage points larger," the Government said.

The report notes that the fiscal consolidation effort, which delivered a central government surplus of 0.2 per cent of GDP at the end of the last fiscal year and which is expected to strengthen over the medium term, will remain a key contributor to the projected decline in the debt stock.

The Government said that, if necessary, it would seek to amend the Financial Administration and Audit (FAA) Act to revise the timeline for achieving the desired debt reduction.

Responding to Wednesday Business queries, the Ministry of Finance said the FAA Act was amended in March this year and as a result, the debt-GDP ratio of no more than 100 per cent by March 2016 was no longer applicable.

The amendment provides for a reduction in the public debt, starting in fiscal year 2017-18 after the current IMF programme expires, to 60 per cent of GDP or less by March 2026 and to maintain or improve the ratio thereafter.

Addressing the debt overhang is a central pillar of the IMF programme, which envisages a reduction to 96 per cent of GDP by 2020.

The IMF report said that by end-May 2014, the Government will collaborate with fund staff to assess the scale of any remaining efforts that may be needed to reduce public debt to the end-March 2020 target or less.

"If necessary to achieve this objective, the Government will identify at that time further measures as part of the programme that could include, for example, further asset sales or swaps and/or other debt-reduction measures," the report said.

"The latter could possibly include using exceptional assistance by development partners, and, in this context, the Government has approached the Paris Club to explore options for debt relief. The implementation of these measures would be completed no later than end-February 2015."

The finance ministry will return to the domestic bond market monthly between May and September. It also plans to refinance a €150-million bond due in October, externally.