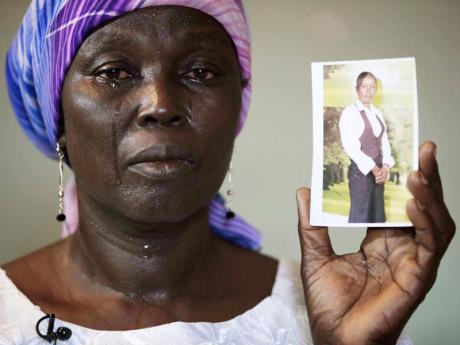 Martha Mark, the mother of kidnapped school girl Monica Mark, cries as she displays her photo, in the family house, in Chibok, Nigeria. - AP

Nigeria is asking the Security Council to impose sanctions on Boko Haram, the al-Qaida-linked extremist group that has carried out a wave of deadly attacks and the recent abduction of nearly 300 schoolgirls, United Nations diplomats said yesterday.

Nigeria, which is currently serving a two-year term on the council, sent a letter Monday night, to the committee monitoring sanctions against al-Qaida, requesting that Boko Haram be added to the list of organisations subject to an arms embargo and asset freeze, the diplomats said.

Unless any of the 14 other council members object by the tomorrow afternoon deadline, Boko Haram will be added to the al-Qaida sanctions list, the diplomats said, speaking on condition of anonymity because Nigeria's request has not been made public.

The al-Qaida sanctions list currently includes 62 entities and groups, and 213 individuals who are also subject to travel bans.

Boko Haram's five-year-old Islamic uprising has claimed the lives of thousands of Muslims and Christians, including more than 1,500 people killed in attacks so far this year.

The group, whose name means 'Western education is sinful', has tried to root out Western influence by targeting schools, churches, mosques, government buildings and security forces. The homegrown terror group was largely contained to the northern part of Nigeria before expanding its reach with the help of al-Qaida in the Islamic Maghreb, the terrorist network's affiliate in West Africa.