'It's very painful' - School grapples with loss of twin boys 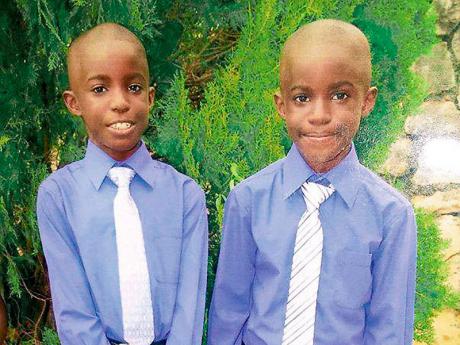 Classes terminated early at the Green Pond Primary School in Montego Bay, St James, yesterday, following devotions and a coping session hosted by a trauma team from the Ministry of Education.

The team was at the school to assist students and teachers in dealing with Monday's tragic death of nine-year-old twin brothers Brayden and Brandon Jones, grade three students of the institution.

Students at Green Pond Primary gathered around a teacher with a smartphone as they looked at photographs taken at the Dump Up Beach, where the boys' bodies were fished from the sea yesterday morning.

Principals of the neighbouring Green Pond High and Farm Primary and Junior High schools, along with guidance counsellors and teachers, also came to give their support.

The blackboards in the boys' class became a canvas for the expressions of their classmates, who wrote and drew pictures depicting how they felt.

Grade three teacher Janet Stewart struggled to hold back the tears as she spoke about the lively, energetic and brilliant child her student, Brayden, was.

"Brayden was a typical boy. Academically, he was one of the better students in the class. It is very painful; it is like it's just the boys the bad things are happening to. He would do his work and then chat with everybody else in the class.

"He was from a steady family background, his adornment, his overall mannerism was good. He was one that I thought would be going places," Stewart said.

Nine-year-old Dana Gutzmore, Brayden's classmate, said she was very sad because she saw the boys playing on Monday while going home.

Brandon was described by his teacher, Keisha Daye, as a student who loved to draw and make things. He was also respectful and loving.

"He enjoyed playing football with his peers, and he and Brayden would greet me with a hug or, when I visited his class, Brayden would high-five me and ask me, 'How are you, Miss?'

"Brandon was in class and Brayden came to get him to go home. I told him to come in and wait with him and play games with the children until the rain eased. They left without my knowledge," said a distraught Daye.

"All the teachers and myself are so sorrowful, because we are a family and two members of the family are no longer with us," she said. "We are praying for the family of Brayden and Brandon."

Hall-Clarke said school would be out for midterm break for the rest of the week, but further counselling sessions would be held with the students and teachers to assist them in coping with the double tragedy.