The truth about crocodiles 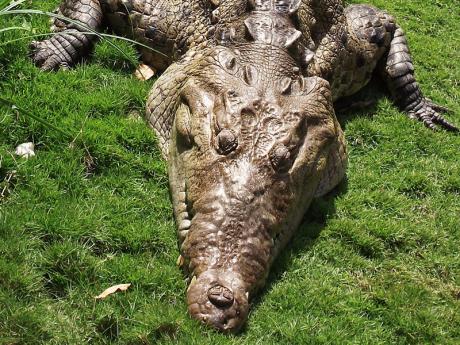 The American crocodile (Crocodylus acutus) will take centre stage at the Hope Zoo in St Andrew on June 7 during 'My Croc Adventure', the country's first crocodile conservation and enviro fair, hosted by the Jamaica Crocodile Working Group.

The day's activities will focus primarily on raising awareness about the island's largest reptile, even while attention will also be on other fauna and flora.

Patrons will be able to get close to the crocodile under controlled circumstances. Experts will be on hand to answer questions about the reptile, which is represented on the Jamaican coat of arms, the crest of which shows the crocodile mounted on the Royal Helmet of the British Monarch and Mantling.

Its fearsome reputation is grounded in ignorance about the true nature of the American crocodile, a name which does not refer to the United States of America but rather to the fact that is indigenous to the Americas.

Shy and reclusive is how Project Manager Danae Vacciana describes the animal, which, as an adult, has no natural predators, as it sits atop the food chain.

"In most instances, when we hear of humans being attacked, it is after they have initiated or encouraged contact with animal … . Crocodiles will stand their ground if guarding their nest, or if they feel threatened and are not able to retreat. It's information like this that we hope to share with the public so that, hopefully, persons can have a greater appreciation for Jamaica's last dinosaur," Vacciana said at last Friday's media launch at the Hope Zoo.

She explained that people should have a healthy fear and respect for the crocodile, based on an understanding that it plays a pivotal role in not only maintaining but enhancing the biodiversity of the ecosystem by culling sick fish and devouring animal carcasses that could potentially contaminate the wetland habitat.

Ricardo Miller of the National Environment and Planning Agency (NEPA) explained that a census will get under way this year to get a more precise count of the dwindling crocodile population, which, in 2004, stood at less than 1,000, inclusive of hatchlings.

He pointed to growing reports of Jamaicans acquiring a taste for crocodile meat as very worrying, noting that up to 80 per cent of crocodile offspring are eaten in the first year by various predators.

In addition, they continue to be threatened by many human activities, with the demand for housing a major contributor, which results in the indiscriminate clearing of land.

He told The Gleaner: "Considerable work is needed in respect of conservation, starting with the survey, population monitoring, public awareness, and education. We must encourage habitat protection if the population is to remain in Jamaica."

He pointed out that in the 1970s, when Florida's crocodile population was in danger of crashing as a result of hunting, the authorities there turned to Jamaica, which provided animals for the American state's breeding programmes.

Now the tables have turned, and the Americans are actively involved with the Jamaican Crocodile Working Group, which involves NEPA, the Caribbean Coastal Area Management Foundation, the Urban Development Corporation, Hope Zoo, and the Tourism Product Development Company.