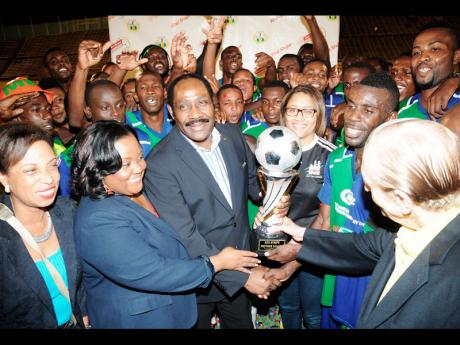 Victory marked a first for the Montego Bay-based club under their new name of Montego Bay United, but added to two previous victories as Seba United in 1987 and 1997. In addition to the RSPL trophy, they collected prize money of $2.5 million.

Forward Dino Williams was the architect of Montego Bay United's victory with a hat-trick in the 26th, 58th and 78th minutes, and two assists for Omar Gordon in the 64th and 69th minutes.

Romario Campbell in the 43rd minute, and Damarley Samuels in the 81st, scored for Waterhouse.

"For the west, it is a big, big thing, humongous. It makes the youngsters understand that there is something in football that they can aspire to, not run off and get involved in other non-productive things, because most of them deviate into other things because there is no inspiration for them," said Dr Dean Weatherly, MoBay United's coach, explaining the importance of the team's win to western Jamaica.

"This will make them (the youngsters) think now that they can be a Dino Williams, an Allan Ottey, Omar Gordon, Dwayne Ambusley, and the likes," added Weatherly, the team's third coach for the season following Donovan Duckie and Pastor Hugh Solomon.

Continuing, Weatherly explained how they studied Waterhouse before taking them apart after the interval.

"The first half, for me, was a study session to see what they were coming with. We saw where all of their plays came through Mr (Romario) Campbell. They are very fast up front with (Juvaune) Benjamin and (Kenroy) Howell, so all we had to do was close down Campbell, so the passes were not there. From then on, they started losing their composure bit by bit, and it was all over," Weatherly said, explaining how his team managed to dismantle Waterhouse.

Williams, he said, was a big part of their plan.

"Dino is one heck of a player! He does not even know how good he is. When I went back there, I said to him, 'come walk with me, talk with me. I have known you since you were a little boy, and I know how you play'. Gradually, we built him back up. Dino is a player who has to be getting the ball all the time or he will fall asleep, but when he is awake, he is unplayable," he explained.

Waterhouse's Anthony Patrick, while disappointed with the result, praised his largely young team for their achievement despite the simple mistakes he said which cost them the game.

"I am happy for the youngsters; they played well throughout the season, and to make it to this stage is an achievement," he said.

Patrick added: "To come here and make some simple mistakes which cost us the game is hard, but that is how football goes," added the man who was aiming to claim his first Premier League title as coach.