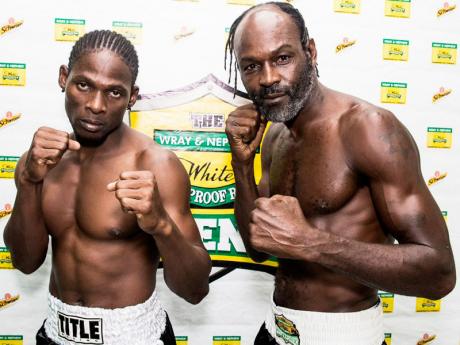 Howard 'The Battersea Bomber' Eastman, seeded No. 2, and the Caribbean boxing team's main hope for the Wray & Nephew Welterweight Contender 2014 title, will make his bid for a semi-final spot tonight when he goes up against Jamaica's Kevin 'Bus Boy' Hylton at the Chinese Benevolent Association auditorium.

The action starts at 8:30 p.m. with two amateur bouts, which will be followed by the main bout that is scheduled to be broadcast live on TVJ at 9:30 p.m.

Eastman, who is one of the veterans in the Contender line-up, is the most experienced boxer in the competition and has an impressive record of 48 wins and 12 losses. What is also noteworthy is that 38 of his victories have been by knockout or technical knockout.

In his first fight in the Contender series against Derrick Spencer, he had the crowd in a frenzy as he launched a methodical and power-packed attack on his opponent that led the referee to stop the fight in the second round. With such a record, he is highly favoured against the 33-year-old Hylton, who goes into tonight's fight with six wins and three losses.

Hylton, who is a good defensive boxer, also had an impressive first fight, which ended with him scoring a technical-knockout victory over Prince Lee Isidore from Trinidad. Isidore fought aggressively in the first two rounds, and was again on the attack in the third when he left himself open and Hylton tagged him with a savage right hook to the temple. Although he got to his feet, he was not fit to continue after the mandatory eight count and the referee called off the fight.

Now he plans to put away Eastman.

"I'm confident about this fight," said Hylton. "I'm positive I'll give him a fight he'll never expect. I hope he comes prepared because I'm so focused on that two million dollars, and trust me, nothing, nothing can stop me from getting that."

Some people believe that at age 43, the 6'2" Eastman is vulnerable. But he has shown so far that he is in great physical condition. He has been working out hard since he arrived in Jamaica in March, and his trainer is confident that he is in top condition and will give a good account of himself. The Caribbean team is, in fact, of the opinion that he will come out as the champion, and he is up for the challenge.

"I'm looking forward to fighting 'Bus Boy' (Kevin Hylton)," Eastman said. "I've never seen any of his fights apart from the one with Prince-Lee Isidore in the Contender series; but I'm actually excited about this match and looking forward to the challenge."

Hylton, who stands at 5'6", will, without doubt, have his hands full tonight against a boxer who has been in the ring with some of the best boxers in the region. Known as a 'spoiler', he uses a tight defence to wear down his opponent, after which he launches impressive counter-attacks. It promises to be an engaging encounter.