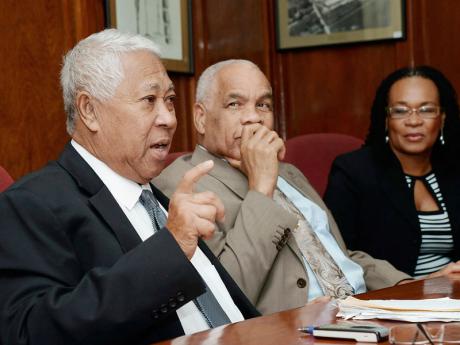 Winston Chung-Fah (left) makes a point while speaking at the launch of the Winston Chung-Fah Football Academy, which was held at the Sugar Company of Jamaica boardroom yesterday. Looking on are Omar Davies (centre), minister of transport, works and housing; and Donna Scott-Mottley, chairperson, SCJ Holdings board of directors. - Ian Allen/Staff Photographer

The vision of Winston Chung-Fah's Football Academy of Excellence moved off the ground with the signing of a 25-year lease agreement with SCJ Holdings Limited, at the Sugar Company of Jamaica offices in St Andrew yesterday.

After a decade of trying, Chung-Fah, a well-known football coach and administrator, was granted the lease to construct his academy on 30 acres of property located close to the Bernard Lodge sugar factory in St Catherine.

It is projected to be a multimillion-dollar academy that will comprise of about eight training football fields, as well as a stadium and boarding facility.

"The concept of a football academy for youth came about years ago and this is about Winston Chung-Fah. This is about developing the youth of Jamaica through football," Junior Lincoln, a director of the Football Centre of Excellence Limited, explained.

"The academy will be designated to bring out the best of Jamaica's youth, getting the best out of our youngsters. We are really looking forward to establish the institution. We will bring in educators as it won't just be about football," he pointed out.

Lincoln also said that negotiations are underway for assistance from a club in Europe. However, he chose not to identify the club.

The project will be done in two phases, with the first projected to be completed in two years.

Chung-Fah, who started Santos FC for less privileged youth, was very happy that he has acquired the land to start the project.

"Let me give the Father thanks for this day. Three years ago I was very sick and doctors thought I would not make it. However, thanks also to my wife, Barbara, I am here to start the realisation of a vision to better Jamaica," he disclosed.

He also said that 10 years ago, he wrote to then Minister of Finance, Dr Omar Davies, who is presently the Minister of Transport, Works and Housing, about his vision for Jamaica.

"He responded in 10 days and said it was a positive idea. He then sent the letter to Livingston Morrison at the Sugar Company of Jamaica, but due to a change in government the plans got delayed," he explained.

However, Chung-Fah persisted and the lease of the land was finally agreed on.

"I believe that the work I was doing in the Cayman Islands was not right. I had 80 kids who were sent to colleges and universities, so I decided to come home to start developing youth here," he outlined.

"This journey is not about Winston Chung-Fah, it is a puzzle and I want to see the pieces put together. We will need to talk to HEART because no one must leave the academy without anything. They must be a carpenter, plumber or something on leaving the academy," Chung-Fah added.

"We are planning to host international tournaments on quality surfaces and will start the academy from age 5-15 years-old. We will start with the boys and then figure out how to get girls involved. We don't want anybody over 15 years old as the aim is for development at a holistic level," he further said.

President of the Jamaica Football Federation (JFF), Captain Horace Burrell, said his administration is fully in support of the academy.

"The JFF endorses this project and we will assist as you have the blessings of the CONCACAF and FIFA by extension," Captain Burrell stated.

Burrell also urged the government, through the Sports Development Foundation, to "build at least one proper all-purpose facility each year".

The lease agreement was signed by Donna Scott-Mottley, chairperson of the SCJ Holdings' board of directors, and Chung-Fah.