South African holds her own among Jamaican legends 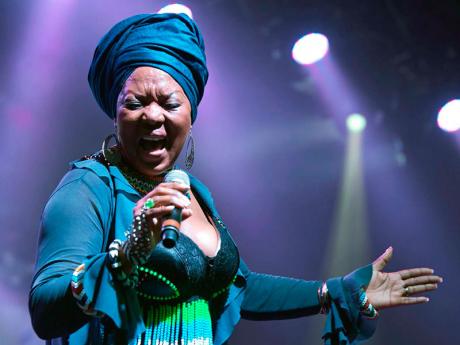 It was a reggae reunion as singers Marcia Griffiths and Judy Mowatt put in memorable performances at last Friday's staging of the Women's Health Network's (WHN) Africa-Jamaica Connection held at The Jamaica Pegasus hotel in New Kingston.

After putting in solid solo performances earlier on in the evening, the legendary I Threes singers joined each other on stage for a special performance the audience will not forget soon.

Guests were taken on a trip down memory lane as the two singers put in a short but powerful performance.

As members of Bob Marley's famous backing band, it was perhaps no surprise that the pair sang tunes from the late reggae legend. Their performance of No Woman No Cry and Could You Be Loved was well received by the audience, who were left wanting more at the end of the brief set.

Though the Jamaicans put in strong appearances, South African singer Lorraine Klaasen held her own.

Following in the footsteps of her mother, legendary jazz singer Thandie Klaasen, the specially invited guest ignited the Jamaica Pegasus ballroom with a slew of African hits.

It is true what they say about music being a universal language, for, despite the language barrier, guests were completely enthralled by Klaasen, though her commanding presence and obvious charisma may have been the reason.

"You've heard a lot of English tonight, now it's my turn," she laughed, opening her set with Click Song.

Offering translations so the audience could follow her performance, Klaasen gave Jamaicans a taste of authentic African entertainment.

She performed a number of hits from her award-winning album, A Tribute To Miriam Makeba, including the famous Patta Patta.

In that moment, the L'Acadco dancers and all the other performers joined Klaasen on stage to perform the patta patta dance, including reggae sisters Marcia Griffiths and Judy Mowatt.

That group performance ended the show on a high, and Klaasen was escorted offstage to a standing ovation.

Though she was celebrating her birthday, Klaasen was in the spirit of giving. Towards the end of her set, she made the announcement that her support for the work of the WHN would go far beyond her performance at the concert.

The singer pledged to donate part proceeds from her CD sales to the WHN.

Executive director of the WHN, Rudolph Stephens, said he was grateful for the support his organisation had received, and expressed that he was looking forward to next year's staging.