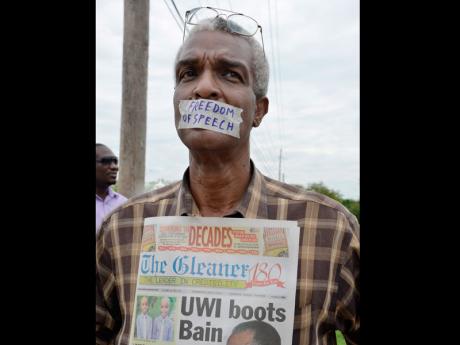 Protesters gathered in front of the University of the West Indies, Mona campus, yesterday in a show of support for Professor Brendan Bain, who was dismissed from his post as head of the Caribbean HIV/AIDS Regional Training (CHART) Network. - Norman Grindley/Chief Photographers

The region's premier tertiary institution yesterday continued to take a battering from local organisations after yielding to a group of 35 civic groups across the region which had demanded the dismissal of Professor Brendan Bain as director of the Caribbean HIV/AIDS Regional Training (CHART) Network.

In removing Bain, the UWI argued he had lost the confidence of the constituencies he served as the head of CHART, after providing an expert report which was used as evidence in the Supreme Court of Belize against repealing anti-gay legislation.

Supporters of Bain yesterday branded the administration of the University of the West Indies (UWI), which operates CHART, as "weak and spineless" and a "sell-out". The administration was also accused of caving in to the demands of questionable interests with ulterior motives and trampling on the rights of well-thinking Jamaicans.

The onslaught on the university started early yesterday, with individuals representing varied groups taking their 'muted' protest to the UWI's front gate.

Brandishing placards, their lips taped shut to represent an attack on freedom of speech, the protestors silently expressed their view that the UWI had kicked Bain out because he dared to speak his mind.

The tape would be temporarily lifted to facilitate interviews with members of the media.

"We want to protest against the death of free speech on the university campus and the way Professor Bain has been treated," declared Shirley Richards, cofounder of the Lawyers' Christian Fellowship.

Richards warned that Bain's dismissal marked the tip of the iceberg.

"It's the first of bigger things to come," she predicted.

"It's a bigger issue than just Professor Bain. If you look at the letter that was sent to the pro vice-chancellor, the groups said they want the removal of Professor Bain plus the implementation of other policies, and I have seen what those policies have done to campuses overseas."

Describing the university's action as weak and spineless, Richards said: "It's not just the university, where is our political directorate ... ?"

Well-known civic agitator Betty Ann Blaine was vocal in challenging the motives of the 35 groups from across the region which had demanded Bain's head.

Blaine said she understood that pressure was being applied from outside Jamaica by the people who are funding this programme, to get rid of Bain.

"It is time for us to expose it and ask some questions. What is the agenda? Who are these people?" said Blaine. "We are told that Professor Bain has lost the confidence of the constituencies he served; was a survey done and who are these constituencies across the region ...?"

What is the agenda?

Blaine also demanded that Dr Carolyn Gomes, the former executive director of Jamaicans For Justice, who now heads the Caribbean Vulnerable Communities Coalition, should come clean on the role her organisation has played in pressuring UWI to remove Bain.

"What is the agenda and are they responsible for his removal?" Blaine asked.

Youths were also out, obliging the media as they removed tape from their mouths to break their silence.

"I just want the country to see the trajectory it is headed down," said Daniel Thomas, president of the Love March Movement, a youth Christian organisation for sexual purity and family.

"This is the road that includes the repeal of the buggery laws and the institutionalisation of 'anti-discriminatory laws'," added Thomas. "This is exactly what it looks like - people start losing their jobs because of scientific facts. The same will happen in relation to people's religious beliefs."