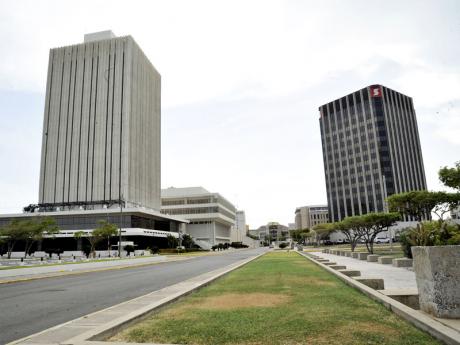 Bank of Jamaica is at left and Scotiabank at right near the waterfront in Kingston. Banking reform proposals now include a Financial Regulatory Committee to police systemic risk. - File

The Joint Select Committee reviewing the proposed Banking Services Act concluded discussions on Thursday which saw compromise reached on the appointment and removal of the supervisor or governor of the Bank of Jamaica and the inclusion of changes relating to liquid asset ratios and reserve requirements for building societies.

The legislation will also add a new oversight body to be called the Financial Regulatory Committee.

Chairman of the committee, Finance Minister Dr Peter Phillips, said he expected a report with all finalised changes to be available for committee review on Monday, May 26. The report will be circulated by email.

Phillips says he plan to submit the revised bill - which is on deadline for passage by early June - to Parliament before the end of the coming week.

The new Financial Regulatory Committee (FRC) will comprise the heads of the BOJ, Financial Services Commission, the Jamaica Deposit Insurance Scheme and the financial secretary.

The FRC is mandated to meet at least seven times per year over routine system matters but will also convene as circumstances dictate in extraordinary circumstances, including the need to intervene in the management of an institution and in periods of systemic crisis.

It will be chaired by the governor of the BOJ.

JSC committee member Audley Shaw raised the matter of the appointment of the supervisor of the banking system via appointment by the governor general on advice from the minister of finance, asking: "Is there really a material difference?"

Previously, the BOJ governor was appointed by the finance minister.

"Why don't we make a change giving more meat to participation in a democracy? Simply removing the signature of the GG - what difference is that?" Shaw asked.

Parliament, he said, should be allowed to review the recommendation of the proposed appointee.

In line with int'l standards

Phillips said, however, that the decision to avoid the political process was in line with international best practice.

"In principle, there is no objection to a role by Parliament. But as we have found with other matters referred to Parliament, there is a risk being run of unintended results, including the politicisations of the post. That would be the worst of all possible worlds."

Phillips said the extension of the central bank governor's term of office - proposed as seven years - puts the appointment outside of the normal political cycle as one means of maintaining his independence.

The two sides eventually agreed to compromise with the insertion of the words: "the governor general acting in council" in the phrasing, indicating that he will be advised by Cabinet and not just by the minister of finance acting unilaterally.

Other changes discussed included insertions from the older Banking and Bank of Jamaica Acts, which allow the new bill to include the one per cent cash reserve allowance for building societies - if their residential mortgages are more than 40 per cent of their prescribed liabilities.

Otherwise, they will be subject to the same reserve requirements as banks.

It was also requested that where reserves are required in foreign exchange that the BOJ also hold them in the same currency; and that where the central bank - which can change reserve ratios from time to time - such changes should not be more than two per cent in any 30-day period and that the supervisor provide at least 15 days notice of the change.

A new insertion was the provision that deposit-takers not be affected by the reserve provisions of the Banking Service Act until the requirements were varied in accordance with the act.

Liquid asset ratios, as prescribed under the bill, will range from 15 to 50 per cent. For building societies, the ratio must not be less than five per cent.

The select committee also addressed the matter of conflict of interest on the Supervisory Board where it is discovered that a director holds shares in a supervised institution. The meeting discussed the issue of allowing the director time to dispose of the shares.