Bruce Golding: Bain, gays and a battle for values 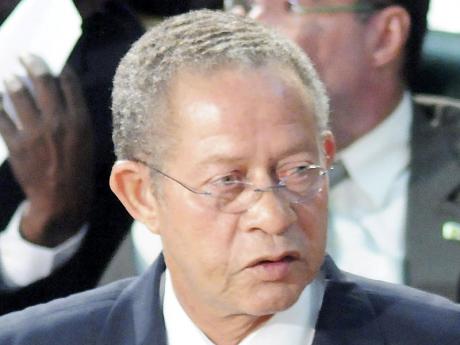 The sacking of Prof Brendan Bain illustrates the intimidating power of the gay-rights lobby, as well as external sources of funding on which we have to rely. I am saddened at the treatment, not just to Professor Bain, but to the Caribbean community.

In his affidavit, Professor Bain rendered a professional opinion that the practice of MSM was harmful and that decriminalising it would not necessarily lead to a reduction in the rate of HIV infections. Other professionals may offer contrary views, and the litigants in this particular case are entitled to present affidavits in support of those views.

Professor Bain cannot be expected to render an opinion other than his own. His statement can render him unfit to serve as head of CHART only if its charter or mandate includes the removal of legal impediments to MSM. Its mission statement says no such thing. Its purpose is "to strengthen the capacity of national health-care personnel and systems to provide access to quality HIV & AIDS prevention, care, and treatment and support services for all Caribbean people". Nothing in Professor Bain's affidavit can be said to compromise his ability or commitment to fulfil that mandate.

The awesome power of the gay-rights lobby is at work here, there and everywhere. Phil Robertson and the Benham brothers were recently booted from their television shows for making anti-gay comments. The CEO of Mozilla Firefox was forced to resign because of a donation made six years ago to an organisation opposed to the legalisation of same-sex marriage in California.

But there is also the awesome power of the donors. CHART is funded primarily by overseas agencies: USAID, Centers for Disease Control & Prevention, Health Resources & Services Administration, Global AIDS Programme and the Global Fund.

While I was in office, subtle and sometimes not-so-subtle pressure was exerted by some foreign governments and agencies to have the buggery provisions removed from our statutes. I rebuffed these efforts because I felt this involved social, cultural and religious considerations on which Jamaica - and Jamaica alone - would have to deliberate.

I am not opposed to the repeal of the buggery provisions in our laws because I don't think that legislation can, or should, try to regulate sexual practices, except in certain circumstances such as in the protection of children. The State has no business barging into any bedroom to molest homosexuals any more than it would fornicators or adulterers.

Many Jamaicans, including me, are of the view, however, that once those provisions are repealed, the battle cry will be sounded to secure recognition of same-sex unions and eventually same-sex marriages.

The new libertarian view that has captured the mind of even President Obama is that this is an expression of an individual's right to choose. It is a dangerous view because it completely severs the moral considerations that inform the norms of a society and the value system within which it operates. The entire society may not be faithful to its value system, but it, nonetheless, recognises its legitimacy and frame of reference. Hence, although adultery and multiple sex partners may be common in Jamaica, no lobby has yet been mounted to legalise polygamy.

This new libertarian view of the right to choose is dangerous because once that moral tether is severed, no taboo can then be justified. What, other than moral considerations, would be the basis for retaining the Incest (Punishment) Act and depriving a man and his adult consenting daughter the right to cohabit? Yet the vast majority of Jamaicans would consider that abhorrent. Why? Because it offends our moral values and cultural tradition.

The Church seems to have reached the point of exhaustion; some have capitulated and even enthroned gay bishops and conducted same-sex marriages; others have retreated into soteriology.

The gay lobby has successfully positioned its campaign as a human-rights issue. If that is what it is, there is virtually no choice in terms of personal behaviour that cannot be justified on similar grounds. At its core, it is an issue of values. That is where the battle must be pitched and fought and won.