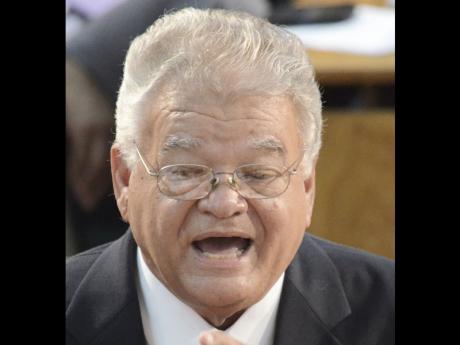 MINISTER ANTHONY Hylton's articulation of the logistics-hub centred economy has been shredded by his opposite number, Karl Samuda who described it as high-flown intellectual speak, lacking in practicality.

"All of the theory is coming out of the high-flown, committee business, research business, writing paper business," Samuda said, telling Prime Minister Portia Simpson Miller that like she, he is a practical man, and the approach to the project is devoid of common sense.

Samuda, contributing to the 2014-2015 Sectoral Debate on Wednesday, moments after Hylton, the industry, investment and commerce minister, spoke in the debate, said the path on which Government is embarked is unlikely to bring success.

"You talk about concept, you talk about business concept, what we need to do is to be bold and deliberate, and we need to make sure that we don't squander money on this, that are not going to materialise," Samuda said.

The Government has sought to position the logistics hub as Jamaica's economic saviour, saying it has the ability to provide countless jobs for Jamaicans.

Hylton told Parliament that the Government, over the 18 months, has engaged "biggest and most experienced players in global logistics".

"Today, we are on the radar of major global corporations looking for a location to increase their operational efficiencies and reduce time to market in this region of the world," Hylton told Parliament.

"That is what we mean when we say the logistics-hub initiative is not simply about Jamaica. It is a global asset, and Jamaica again matters to the world trading system."

Samuda said the minister has done "the most incredible PR on this logistics hub", and argued that the idea has been around for decades, but is being positioned as something new.

To drive home his point, Samuda, referring to finance minister Dr Peter Phillips, saying, "when he can get you, in your state of financial stress, to set aside $680 million to engage in mapping for the logistics hub, I think you are the most generous minister of finance on earth."

"It does not make sense to be spending money when the people in our communities can't make ends meet," Samuda said.

He said the build-out of 200,000 square feet of ICT facility in Portmore would have created jobs for young people, but expressed disappointment that the project never got off the ground because of dithering, and then an eventual denial of permission to go ahead with the project.

"Had that been built ... that could have been in operation for two years. Another opportunity lost!"